A shower and a shave doesn’t always make you feel better. Sometimes you have to take a longer look in the mirror. 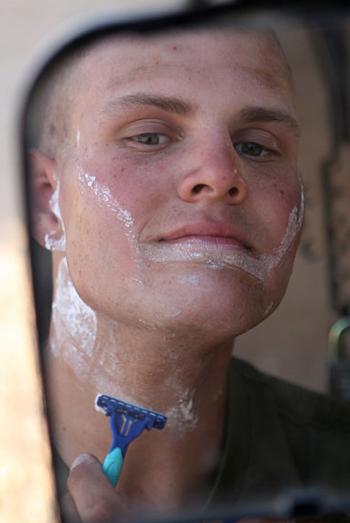 My thoughts were crowded with recent and intersecting histories of bad decisions, poor choices, and failures. I felt like hell, so I got out of bed, walked into the bathroom, and splashed water on my face to wash away the problems I was facing. Not wanting to face myself after last night’s performance, I forced myself to glance upward into the mirror. I stared for a moment before falling into a dreamlike trance. Was I still high, or was my conscious trying to talk to me face to face?

My face, unclean and unshaven, deep dark circles around my eyes, a network of lines and crevices, reminded me of Rocky Balboa’s face after having gone fifteen rounds with Apollo Creed.

My hair, greased with sweaty palms from the habit of running my fingers through my hair when faced with nervous and jittery decisions, needed to be washed.

I thought a shower might do some good. So I took one and went back to the mirror to check for improvements. Still not satisfied with what I saw, I decided to shave – maybe that would do it. I opened the drawer and reached for a new razor, got lathered up, and began to shave away any traces of the “old me”, looking for someone better.

Still not satisfied with who was looking back at me, I kept shaving. The first cut was an accident; I had simply borne down to hard – the blade was new, there was no need to press. The second cut was careless. The third was deliberate. As were the frantic fourth, fifth and sixth. Angrily, I looked at my face and thought to myself, ‘There, that should do it!” A little bloody… but it worked. The shave, being as close as it was – a little too close, convinced me that I needed help with my addiction.