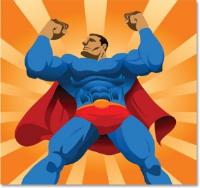 I recently heard a surprising, thought-provoking response to that question. A critique group gathered to practice their public speaking skills. They challenged each other to do a two-minute impromptu talk answering the question, “Who is your hero?”

The last speaker began with an attention-grabbing opening line: I am my hero.

Sounds a bit self-centered, doesn’t it? I wondered immediately whether the guy had trouble getting his big head through the door.

But his explanation made a lot of sense. He’s right, and I really admire the unique look at a common question. Based on his thoughts, here’s my take on myself as my own hero.

A hero doesn’t need super powers, a cape, or a mask. If I look at my life as a story, I’m the main character. The principle character in a story is—the hero. I know—hero is technically male and heroine is female, but you get the idea.

Each of us plays the principle role—the hero (heroine)—in our own life story.

So what do you do if your hero doesn’t seem all that heroic? What if the hero’s life is mundane, routine, even boring? Well, that’s the really cool aspect of this perspective.

You write, direct, and produce. You create the sets and the costumes, choose the supporting cast, and select the locations. You’re the editor.

So if you don’t like the story, you can change it!

This is a great time to consider some editing. As I think about goals for 2011, I’m looking at God as my audience. Here are a few things I think God wants from my story. (Next Year Is Nearly Here) (God’s Plan For My Life)

God wants a story about pursuing God-sized dreams. Perhaps that means doing something big, or doing something small in a big way. A friend is volunteering for “children’s story time” at a library, and she’s taking a class in storytelling so she’ll be interesting and compelling. She’s doing a small thing in a big way.

I hope my dreams don’t reflect a small view of God.

God wants a story about the future, not the past. He’s about new beginnings and fresh starts. If the story seems pre-determined by regret, mistakes, bad choices, or someone else’s actions, maybe it’s time to tear up that old script.

Jesus did not come so we could live in chains forged in the past. He invites us to follow Him into a future of freedom and new life.

God wants a story of courage. One of the most frequent directions in Scripture is Don’t be afraid. That doesn’t mean we shouldn’t experience fear. When the disciples saw Jesus walking on the water, He said: “Take courage! It is I. Don’t be afraid.” [Matthew 14:27b]

As I think about my goals, the story I wish to write in 2011, I picture Him saying those words. He invites us to face the fear, trust that He walks beside us, and write a courageous story.

God wants a story of joy. Too often Christians engage with wider culture in negative, angry ways. God is portrayed as a cosmic killjoy and believers are recognized primarily for what they oppose.

My pastor tells a story of attending a parents’ meeting at his kid’s school. Some controversy was anticipated and a man who didn’t know him leaned over and whispered, “This should be entertaining. The Christians are here in force.” Asked to explain why that would be entertaining he replied, “They only show up when they’re mad about something.”

I like Rick Warren’s quote: I love Jesus. I’m just not angry about it.

God wants a story of stewardship. He doesn’t want me to hide my light or bury my talents. He intends my gifts to be used wisely and responsibly, but also extravagantly in God-sized ways.

That’s the objective of a great storyteller. I believe God’s pleased when we use His gifts to compose big stories of growth, courage, joy, and energy.

In an interesting story, the hero doesn’t sit on the couch and complain. My hero’s got some work to do.

How will you edit your story to delight the audience?