My name is Tim, I will by forty five next month. I accepted Christ as my Lord when I was just like 9 or 10 at a Nazarene Church summer school thing I got invited to. And my Mom saw to it that I went to church even if I was the only one in the house that did. I went through confirmation class and all that at the Methodist Church. So I knew about God, and His plan through Christ. I thought I knew what separation from God meant. I thought I knew what hell was all about. 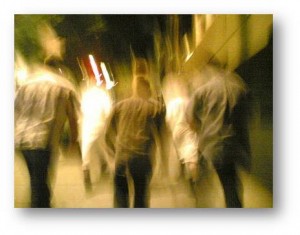 I started using when I was like 12 or 13. My drug or drink of choice has changed lots of times. Mostly what was around at the time. In the late 60’s it was pot and more pot, wine, whiskey, BEER, did way too much acid. When I was still in junior high there was a time that some of got into sniffing glue and gasoline. I got higher on that then any other drug that I ever took.

With the 70’s I started to shoot dope, played with heroine and lots of morphine. I was a rush freak and liked to go up more then down. With the drugging I continued to refine my drinking. Started working in the oil fields of Kansas, Oklahoma, and Texas. And it wasn’t mandatory to be an alcoholic, but it seemed to help at the time.

By the 80’s I was strung out on methamphetamine (crank). I had some friends that got into making it and got real big in the business. So it was crankster gangsters and scooter bandits. Lost some good jobs and wound up in treatment for the first time in 81.

When I started getting into drugs and stuff, I opened up some doors in the spirit world that should have been left closed. See when I would start tripping, it was a little different then a lot of others. I couldn’t tell the difference between what was real and what was in my head. So therefore what was in my head was as real to me as looking at anything around me is now.

One time in particular, I was at a friends house, we were in the old garage connected to the side of the house. Had been eating LSD and sniffing gas all of a sudden the room changed, now there were no doors and there were no windows. No way in and no way out. This wasn’t like a dream, all floaty and weird. This was just like being in a room! Just me And Jake, I looked over my shoulder and my other friend John was on the couch but he was dead. I looked back at Jake, and he had this evil grin on his face. Right then I knew that this was Hell, this was eternal. There was no sense of time. I was flipping out, running around screaming Oh GOD NO. I just knew that the “this is it” thing that I used to fear had happened.

This was separation from God, this was eternal hell. Pretty heavy load for a 14 year old hippie kid! The weird thing about it was after I did come back, Jake knew what was going on, he heard me screaming and stuff. But we didn’t wake up John who was just sleeping on the couch, and we didn’t wake Jakes family right in the next room. This may not make any sense to any body else, just something I need to get down in black and white. It is still in my mind like it was just yesterday. That is just one of many things that have gone on in this circus of mine, so If I seem a little strange sometimes, duh! its because I am (hee hee hee).

The thing that got me back on track was when I got busted trying to break down the back door of the AA club house in a nice blackout right across the street from the police station!! Real smart move. Well when I got of jail and home I got on my knees and surrendered to the Lord, got back in my church home, made restitution to the AA house. And started going to meetings.

Really all I need to say is I drank too much, and I used to many drugs. Found Christ at a young age, and walked away more then once. Done a little jail time not much, had three DUI’s four walking while intoxicated’s (for real) and lots of pain and suffering caused to my wife of 26 years and my four kids. I have been clean and sober for 923 days.

The Lord has giving me back the desire to be free in Him and the craving for His word! I’m going to shut up now, this has gone on way to long.

You know if God can renew a scrambled up brain like mine. there may even be some hope for some of you “normal people.” 🙂

TJ
Still under construction from destruction.

Christ in you the hope of glory!