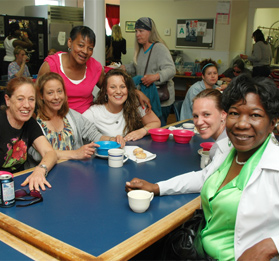 I have been a participant in small groups and small group ministries for a long time. I have led groups, I have been trained as a group leader, I have written curricula for small groups, I have organized small group ministries and trained small group leaders. These experiences have been very helpful to me and I count them as some of the most valuable of my entire Christian experience. None of them prepared me, however, for the kind of group experiences found in what we now call ‘recovery groups’. I remember, for example, the first time I attended a 12 step group. I knew, from the moment the very first person began to speak, that I was participating in a group dynamic which was dramatically different from any other I had experienced.

groups it is important to begin by understanding that the purposes of these two kinds of groups are usually very different. Traditional small group programs may have a variety of goals but they are usually optimized to encourage the development of social relationships within a congregation. The primary task is to encourage acquaintances to become friends and to encourage friends to become good friends [this would include goals such as assimilation of new members, retention of existing members etc.]. These are good and important goals. They are, however, very different goals from those of recovery groups. Recovery groups are optimized to facilitate personal transformation, personal change. If people make some friends in the process[and they often do], that’s great. But the central goal is personal transformation – not social networking, or education. For example, a recovery group might seek to help people whose character and identity have been dominated by an experience of trauma[e.g. sexual abuse] to become people whose lives are free from this domination. Or, a recovery group might seek to assist people whose character is dominated by the addictive process to become people whose character reflects a deep experience of serenity. These are rather more psychologically ambitious goals that those of typical small groups and, as a result, the groups are different in many ways.

Group Composition
Normally small group programs in local churches are open to participation by any member of the congregation or community. Small groups are often encouraged to include as broad a diversity of people as possible. For that reason there are few ‘entry fees’ or ‘hoops’ you must jump through in order to get into the small group. Leaders are trained to make all kinds of people feel welcome. In contrast, the vast majority of recovery groups are designed for a very specific ‘target’ population. Recovery groups are for ‘adult children of alcoholics’, ‘adult survivors of childhood trauma’ or other specific populations. The reasons for this specificity are probably obvious. Because you must recover from something, a recovery group necessarily names the thing from which you are recovering. More importantly, however, limiting group participation to people working on a particular issue also integrates some of the spiritual discipline of confession into ‘just showing up’. Mere attendance at a traditional small group does not typically provide any benefit to group participants. But merely showing up at a recovery group can have some powerful benefit because it is a public confession that I still am working on this issue. Like ‘showing up’ for therapy, just showing up reminds me that I am still in the process, I still need to be working on this issue. God honors this discipline of confession – it makes accessible the resources of God’s grace in some powerful ways.
Leadership

In traditional small groups leadership skills are vitally important. The more training the leaders have, the better. Leaders are expected to be creative, to take initiative, to ‘manage’ the group dynamics well. Expectations of leaders in recovery groups are very different. Most importantly, in the vast majority of recovery groups, leaders are expected to be participants first and leaders second. It is not difficult to find recovery groups who are profoundly distrustful of the whole idea of ‘leadership’ because of the critical importance of each person present working on their own issues. If someone comes to a recovery group to work on other people’s issues, you’ve either got a ‘therapy group'[which is fine as long as everyone knows what the deal is] or some one’s codependency is out of control[which is not fine and could work to the detriment of all participants]. In some cases leadership of recovery groups is rotated among several participants to de-emphasize the role of leader. In twelve step oriented recovery groups the role of leader is often further limited by having a written ‘script’ for the group process which the leader for the evening reads aloud. I know one trainer of twelve step group leaders who is fond of saying ‘if you are working on your own issues and you can read, you can lead a twelve step group.’ Clearly the emphasis is on the leader as a participant! The closer, of course, that a recovery group leans in the direction of a therapy group, the more demanding will be the role of leader and the more important it will be for leaders to be trained appropriately and for participants to have clear, shared expectations about the role of the group leaders.
Group Process

Probably the biggest difference between traditional small groups and recovery groups is in the area of group dynamics. Let me point out three of the largest differences.

a. Discussion/Confession
In terms of what actually happens during group process, most traditional small groups are discussion groups. The hope is that, in the process of discussing something, people will develop more meaningful relationships or that they will learn things. I really enjoy discussion. It can be a wonderful, educational, and stimulating experience. But, let’s be clear – discussion is rarely the ‘stuff’ of personal transformation. I can discuss my issues until I am blue in the face but it will not result in personal change unless empowered by other dynamics. It’s worth noting that there are no specific biblical promises about discussion – there are no texts which say ‘blessed are those who discuss’. It is also worth mentioning that those of us who use our cognitive skills to support our dissociative tendencies, may enjoy discussion for the wrong reasons. Many of us have learned how to ‘hide out’ in discussion groups. I learned very early that I could use the discussion dynamic to avoid letting people know who I really am. If I was creative and energetic as a discussion group leader, I could feel good about my competence and even impress people with ‘what I thought about things.’ But ‘what I thought about things,’ while important, is only a very small part of me. For me, keeping groups focused on discussion was a way of guaranteeing that my deep emotional pain would be safely and securely hidden.

Recovery groups rarely emphasize discussion-centered group dynamics and in many cases go to great lengths to eliminate discussion[often called ‘cross talk’] from group dynamics. What replaces discussion as a group dynamic is typically the dynamic of testimony. Whatever else may be going on, the development of recovery groups in the local church represents a recovery of ‘testimony’ as a spiritual discipline. Testimony, in brief, is a story telling discipline – it involves saying aloud part of my life’s story in such a way as to clarify how I have (or haven’t) experienced God at work. Like confession, testimony is a social discipline which builds in us a capacity for the truth. Recovery groups typically spend most of group time allowing group members to tell their stories. It is a simple but very powerful dynamic.

b. Confidentiality
If you learn in your small group or bible study that Mary is having surgery this week, you would probably assume that you were providing Mary with a valuable service by calling the people who head up the ‘prayer chain’ at your church and telling them about the pending surgery. The more people who know about Mary’s situation, the better. Failing to pass on this information might, in fact, be construed as a failure to ‘care’. This is often called ‘sharing’ and it is understood by people who do this sort of thing to be a practical way of expressing love and concern. If, however, you learn in your recovery group that Mary is having surgery this week, and you choose to pass on this information to anybody, for any reason, without Mary’s explicit permission, you would have profoundly violated the typical expectations of group members. Your behavior would not be construed as ‘sharing’ but as ‘breaking confidentiality’. What accounts for this dramatic difference? First, ‘discussion’ does not usually require confidentiality. As long as we are talking about what we ‘think’ about things, the level of self-disclosure is relatively low. But, ‘testimony’ demands a much more significant level of self-disclosure and the need for confidentiality goes up dramatically. To ‘share’ what someone ‘thinks’ about something is very different from ‘breaking confidentiality’ about some one’s testimony.

c. Self Disclosure
Most people feel the difference between ‘discussion’ groups and recovery groups most intensely at the level of self-disclosure. Once, in a training program for small group leaders, I was encouraged to begin the group process with a really ‘safe’ question – like ‘What’s your favorite flavor of ice cream?’ The theory, of course, is that, in order to build trust, you must begin with safe material and then very gradually work towards questions that require increased amounts of self-disclosure. This is, in fact, a reasonable theory for discussion-based small groups with relationship-building or education as their central goal. At this point, however, the instincts of recovery groups are almost exactly the opposite of traditional small groups. Recovery groups typically begin by having participants say aloud one the most difficult and painful facts of their lives. In twelve step groups, for example, the first thing said is typically “Hi, my name is ____ , and I’m an _______.” No attempt is made to gradually ‘work up’ to “I’m a sex addict” or “I’m a cocaine addict”. Such confession is an entry-level requirement for group participation. This requirement may not be implemented by going around the group and having people say “I’m a …”. But just showing up for the group often has the same effect. There is a lot of self-disclosure involved in showing up for a group advertised as for people struggling with a particular issue. This entry-level requirement of honest self-disclosure profoundly alters the dynamics of the group process.

I thoroughly enjoy discussion-based small groups. They are good places to make friends and good places to learn things. But they are rarely the place to look when you need to become a different kind of person. In times like that, you need places where the spiritual disciplines of confession, testimony and prayer can be used by God to transform you into a more grace-full person.

NOTE: Reproduction in any form without the express written permission of the author is prohibited.~ em>