I recently came across a souvenir my mother received from her British pen pal in the 1950’s. It’s one of those trick images of Queen Elizabeth and Prince Philip; who you see depends on the angle of the portrait. 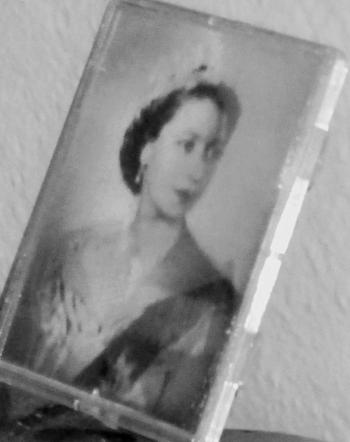 It brings to mind the following scripture:

For now we see through a glass, darkly; but then face to face: now I know in part; but then shall I know even as also I am known. 1 Corinthians 13:12

And it made me think of my distorted image issues:

“…I stood in my bedroom, in front of my three-way mirror. I’d seen so many versions of myself. I’d been fat and thin, feeling both unworthy and worthy. Yet I was never satisfied…”
(Excerpt taken from Cruse’s book, “Thin Enough: My Spiritual Journey Through the Living Death of an Eating Disorder”)

Images and mirrors don’t delve into great detail about each trauma, milestone, issue and phase of our lives. They don’t accurately depict things as they are. Smudges and warps can alter what reflects back at us. And these images and mirrors certainly don’t predict the future or explain the Most High completely.

So, perhaps, we need to adjust our expectations about them.

Like Mom’s antique souvenir, we may be looking at ourselves one way, yet there’s another facet that is not as easily seen.

We may fully believe we’re seeing, metaphorically, the Queen.

But instead, it’s the Prince.

And, even more complicated still, it can be a combination of them both at the same time.

Nothing ever is as simple as it appears; nothing is as it seems.

For if anyone is a hearer of the word and not a doer, he is like a man who looks at his natural face in a mirror; for once he has looked at himself and gone away, he has immediately forgotten what kind of person he was. But one who looks intently at the perfect law, the law of liberty, and abides by it, not having become a forgetful hearer but an effectual doer, this man will be blessed in what he does.
James 1:23-25

And be not conformed to this world: but be ye transformed by the renewing of your mind, that ye may prove what is that good, and acceptable, and perfect, will of God. Romans 12:2

Let’s reflect on His view of us.

Seeing through a dark glass these days about yourself? Take heart. There’s so much more to your life than what you think you see.

Let my mother’s souvenir remind you of that.

But we all, with unveiled face, beholding as in a mirror the glory of the Lord, are being transformed into the same image from glory to glory, just as by the Spirit of the Lord. 2 Corinthians 3:18