Have you ever seen the sport of curling?

Curling, like most games, incorporates complex strategies and techniques, but the basic idea is pretty simple. The object, like other similar games (Crokinole and Shuffleboard), is to score points by getting your team’s markers closer to the target. 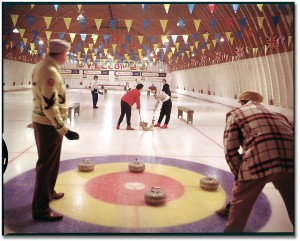 All three tactics are important, but inexperienced players tend to become obsessed with the last two—and especially with #3. They focus so much on the opponent’s moves that they lose sight of the objective.

The first requirement is getting your own stone near the target.

See the principle? We can become so involved with what others are doing (that’s mostly out of our control) that we forget to concentrate on our own skills, thoughts, and actions.

The game is complex, but the objective is pretty simple. Often, however, we over-think and add layers of complication. I think life’s like that.

I think it’s part of what Jesus was getting at in this familiar scripture:

Perhaps He’s telling me to develop my own character (which I control) rather than fussing about the character of others.

Does that mean I shouldn’t care about others?

No! I sincerely wish to encourage positive behavior and confront wrongs. But I think Jesus points to the most effective strategy for helping others to be their best.

Jesus was a leader. He knew His destination and His path. He didn’t force or coerce; He used words and actions that inspired others to follow.

I think life would be a lot simpler. Probably not easier, but simpler.

Do you agree? Where do you get so focused on what others are doing that you lose sight of the goal?