The disciples were sitting in a boat. [Matthew 14:26-32] After a long night battling the wind, they saw a man walking toward them on the water. Tired and bleary-eyed, they imagined that a ghost approached from the mist. They cried out in fear. 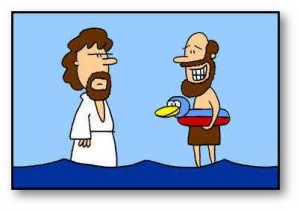 Wouldn’t you be afraid? Did Jesus seriously expect them to suddenly stop feeling fearful?

Jesus invited Peter to come to Him. Peter stepped out of the boat and began walking toward Jesus—he was walking on the water!

But then he looked around, realized where he was and what he was doing, and became fearful. He began to sink, and cried out for help. Jesus reached out his hand and caught him.

But look carefully at Jesus’ next words.

Peter’s fear didn’t cause him to sink. His doubt, his reaction to fear, was the problem.

When we perceive a threat, we experience fear. That’s normal, and Jesus wasn’t telling us to deny that feeling. He was instructing us about how to respond to fear.

Fear is our strongest emotion. If it’s allowed to rule, fear overwhelms every other thought and desire. Fear squelches love. As Peter discovered, unchecked fear even trumps faith.

So if fear is so normal and so powerful, what’s our answer? Look back at Jesus’ words when the disciples saw him and cried out in fear.

Courage is not absence of fear. Courage means doing what is right in the face of fear.

Our natural reactions to fear are flight, fight, or freeze. We doubt, make excuses, become angry or frustrated. We blame, become silent in denial, or simply run away.

Jesus says, “Take courage.” Face the fear. Acknowledge it, and then don’t let it control you.

It wasn’t easy for the disciples. It still isn’t.

What’s your typical reaction to fear? How can you acknowledge that behavior and change it?