Have you thought about wrapping up the old year? How about plans for the new year? 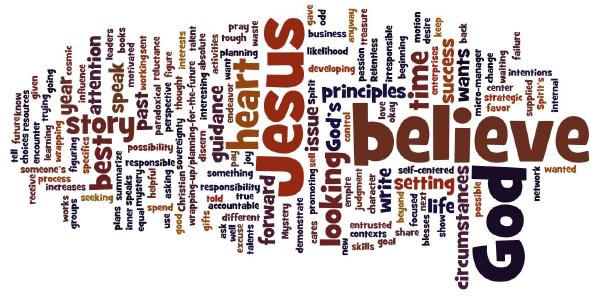 It’s that odd time of year when we spend equal time looking to the past and the future. It’s sort of like doing taxes—you summarize the past year while figuring out what needs to change going forward.

One of my internal principles tells me to pay attention when I encounter the same issue in different contexts. I figure someone’s trying to tell me something. Recently I’ve run across a few folks who are asking, “What does God want me to do next?”

In the introduction to “Relentless Grace” I expressed my reluctance to claim that “God told me” to take a particular course. I won’t speak for anyone else, but I suspect I sometimes use “God’s plan” as an excuse to do what I wanted to do anyway.

I do believe that God speaks to us, and I certainly believe in His absolute sovereignty. Nothing is beyond His control; nothing escapes His attention.

But I also don’t see Him as a cosmic micro-manager. I believe He gave me gifts, talents, and interests. I believe He sent Jesus to demonstrate the principles of life. I believe He wants me to use what He’s supplied to write the best, most interesting, most helpful story possible as long as I’m here.

I believe He cares less about the specifics of what I do and more about the heart behind my choices. As I see it, He mostly wants me to be the main character in a story filled with passion, joy, service, and love. And I think He wants me to write that story.

I don’t believe He just set it all in motion and then stepped back to see how it would turn out. He works for good through the circumstances of my life without orchestrating those circumstances. And if that sounds a bit paradoxical, it is. He’s God, I’m not (thankfully). Whenever I try to put Him into human terms I get something that doesn’t quite fit.

All of this is just my way of saying that I’m responsible for setting goals and accountable for working toward them. Yes, I pray for the Spirit’s guidance, and I believe I receive it. But I’m expected to do my part.

I’m thinking of several well-known Christian leaders who sell lots of books, speak to large groups, and wield considerable influence. Some, I think, seem primarily interested in business success, being the center of an empire, and promoting themselves. Others are primarily motivated to speak from the heart about Jesus.

Their business success does not prove that God blesses the heart behind it. Plenty of unscrupulous people build highly-successful enterprises. I also don’t believe that smaller degrees of success, or even failure, indicate that God didn’t favor a particular endeavor.

And I’m not always able to know which is which. Making that judgment—it’s far above my pay grade.

My job is to do my best with the time, talent, and treasure I’m given. That includes seeking God’s guidance, but it also includes strategic planning, goal setting, developing my network, learning new skills, and many other activities that are my responsibility. Doing them well increases the likelihood of success. Doing them poorly, or skipping them and waiting for God to make something happen, is an irresponsible waste of the resources He’s entrusted to me.

Mainly, what I ask from the Spirit is to show me when my heart, my motives, and my true, inner intentions are self-centered. I believe that if I keep my desire focused on Him I’ll be okay.

So I’m beginning the wrapping-up/planning-for-the-future process. I’ll share some of that, and I’d love to hear how you’re looking back and looking forward.

My guess is that some of you disagree with my perspective. That’s why I wrote this entirely in first-person. It’s the way I see it for me, the best I can discern at this point. I’m entirely open to the possibility that I’m wrong.

So how do you see this tough issue?