“At least one out of every ten people with an eating disorder is a man or a boy, yet most people still think of eating disorders as women-only.” ~ Eating Disorder Referral and Information Center 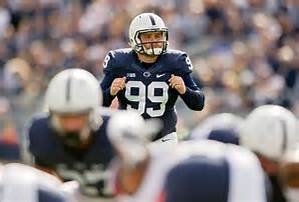 American football had some startling news this autumn season. In early October, player, Joey Julius discussed his departure from Penn State football last spring and summer on Facebook; his reason given was his struggle with binge eating disorder.

The Nittany Lions’ kicker wrote on his page…

“Due to my increase in not only weight but also depression and anxiety, my team of physicians started to notice not only a change in my overall happiness, but also my performance as a normal human being… I learned that for the last 11 years of my life, I have suffered through a disorder known as binge eating disorder.”

His response is not surprising.

First, the male gender is not regarded as an affected population when it comes to this affliction.

Also, little is known about Binge Eating Disorder itself, in either gender. Therefore, you have a stifling environment for harmful anguish and isolation to flourish.

B.E.D., also known as compulsive overeating, is not a widely known eating disorder as that of anorexia or bulimia. Yet, some within the medical community believe it is possibly the most common eating disorder affecting individuals.

Binge eating disorder’s distinguishing feature is the frequent consumption of large amounts of food while feeling a lack of personal self-control in his/her eating habits.

B.E.D. is often mistaken for bulimia. Yet, here is where a distinction needs to be made. Binge eating disorder differs from bulimia in that people struggling with this disorder usually do not purge their bodies of eaten food via such methods as fasting, vomiting, laxatives, excessive exercise.
Instead, behaviors which typically occur during binge eating disorder episodes include…

• Eating a larger amount of food than normal during a short period of time (within any two hour period)
• Eating until feeling uncomfortably full
• Eating large amounts of food when not physically hungry
• Eating much more rapidly than normal
• Eating alone because you are embarrassed by how much you’re eating
• Feeling disgusted, depressed, or guilty after overeating
• Binge eating occurs, on average, at least 2 days a week for six months
! The DSM-IV, Diagnostic and Statistical Manual of Mental Disorders, fourth edition, Washington D.C.: American Psychiatric Association, 1994) http://www.edreferral.com/binge_eating_disorder

But make no mistake about it. This is a harmful, potentially deadly disorder.

No, it may not have the emaciation of anorexia or the purging of bulimia.

Nevertheless, binge eating disorder, with its unhealthy binging factor, has its own serious health risks including obesity, Diabetes, high blood pressure and stroke.

The eating disorder profile most of us think of is far from football heroes. Yet, Joey Julius and his courageous disclosure cannot be denied. Disordered eating and image issues are not just “a girl thing.” It is a male issue too.

Documentation of this reality was, after all, recorded centuries ago.

“A male teenager represents one of the first documented eating disorder cases… In 1694, London physician Richard Morton reported the first case of anorexia nervosa in a 16 year-old male.” ~http://www.edreferral.com

We need to stop the stigma about who is struggling with disorder. The pain translates genders, affecting people from all walks of life.

I returned, and saw under the sun, that the race is not to the swift, nor the battle to the strong, neither yet bread to the wise, nor yet riches to men of understanding, nor yet favour to men of skill; but time and chance happeneth to them all. Ecclesiastes 9:11

Lives are at risk: male, female, young, old, athletic, artistic, representing every faith and li
festyle choice you can name.

There is NOTHING new under the sun!

Disordered eating, no matter what the strain, is an equal opportunity oppressor, threatening not just one’s actual life, but his/her quality of life also.
You can be the most virile, handsome, athletic and powerful football player out there- and still be affected.

If you are male and struggling, please do not be ashamed. You are not alone.

And you are, in no way, weak or inferior.

There is help for you. Two of the many resources for eating disorder treatment are listed below.

It’s time all of us become aware and help the sufferer, no matter who she-or he- may be!