I have a friend who insists on never saying “goodbye.” Instead, she utters, “Later” at the end of our conversations.

This word started me thinking. And the first thing which popped up was another word, procrastination. Its definition being… 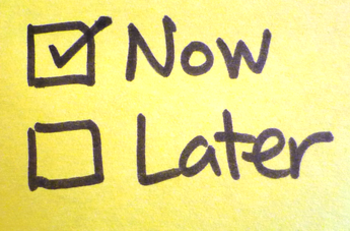 “… the avoidance of doing a task which needs to be accomplished. It is the practice of doing more pleasurable things in place of less pleasurable ones, or carrying out less urgent tasks instead of more urgent ones, thus putting off impending tasks to a later time. Sometimes, procrastination takes place until the “last minute” before a deadline.”

Withhold not good from them to whom it is due, when it is in the power of thine hand to do it. Proverbs 3:27

You’ve said it; I’ve said it. Perhaps, we delude ourselves with Little Orphan Annie’s musical perspective, “The sun will come out tomorrow.” There is such promise and hope then and there.

But what about now? What about today?

“Start where you are, use what you have, do what you can.”
~Arthur Ashe

Those of us who struggle with addiction, compulsion and disorder often have an unrealistic perfectionism which thrives on procrastination. When things are “just right,” when this or that circumstance changes, THEN we’ll get sober.

The hidden message in those theories is this: “But for now, I’m going for my addiction. I’m going to binge, get drunk, overdo it and live it up like there’s no tomorrow.”

And so, not surprisingly, nothing changes. There’s no sobriety, no different or healthier choice. There is only more of the same.

Still, this doesn’t absolve us from reality:

Scripture covers not just our eternal soul destination, but also a blueprint for how to live in the here and now. The Most High is not a Deity Who operates in procrastination (1 Corinthians 14:33).

Therefore, we are not let off the hook concerning our innate spirituality.

… “Far be it from us that we should forsake the LORD to serve other gods.” Joshua 24:16

To attempt to wriggle free of responsibility is to come from a place of excuse, negligence and even agreement with the Adversary to us all.

How art thou fallen from heaven, O Lucifer, son of the morning! How art thou cut down to the ground, which didst weaken the nations!” Isaiah 14:12

Sound too extreme and far-fetched?

Well, if we are refusing to deal with our faith, our health and our issues, aren’t we, in essence, asserting how we know BETTER than The Almighty?

But you said in your heart, “I will ascend to heaven; I will raise my throne above the stars of God. And I will sit on the mount of assembly In the recesses of the north. I will ascend above the heights of the clouds; I will be like the most High.” Isaiah 14:13-14

Wherever we are on this spiritual spectrum, we cannot avoid or forfeit choice.

We possess free will. However, what we do not possess is the opting out of the free will choice’s consequences.

“Nevertheless you will be thrust down to Sheol, To the recesses of the pit.” Isaiah 14:15

Now, at first glance, Isaiah 14 may appear to be too strong of a consequence. Surely, we wouldn’t be punished the same as the devil, right?

Well, if we’re lining up in agreement with Satan, who is to say we wouldn’t be responsible for a harmful downfall?

“Ye are of your father the devil, and the lusts of your father ye will do. He was a murderer from the beginning, and abode not in the truth, because there is no truth in him. When he speaketh a lie, he speaketh of his own: for he is a liar, and the father of it.” John 8:44

Is not addiction, with its procrastination, a murderer?

Is not addiction, with its procrastination, rife with deceit?

Is not addiction, with its procrastination, choosing its way instead of Elohim’s as “the final say?”

Again, no one escapes choice. No one is excused from facing procrastination.

The Most High will work with whatever we commit TO Him:

Commit thy way unto the LORD; trust also in him; and he shall bring it to pass. Psalm 37:5

Don’t you think that would also include the procrastination issue, even in the middle of our addictions?

There is power is STARTING.

What baby step can be taken right now? What decision? What can be accomplished NOW?

“…now is the accepted time; behold, now is the day of salvation.” 2 Corinthians 6:2

Speaking of the word, “Now,” one more thing.

Years ago, The Most High spoke to me, telling me to observe the word… BACKWARDS. When I saw what “NOW” spelled, it lit faith and assurance regarding my momentary reality.

O sing unto the LORD a new song; for he hath done marvelous things: his right hand, and his holy arm, hath gotten him the victory.
Psalm 98:1

What is on the other side of our addictions, our beliefs and our responses concerning them?

What is on the other side of our procrastination?

Will we experience those blessings now… or later?