What do you think Jesus wants you to do?

I’m not thinking of specific choices like whether to have pizza or turkey for lunch (I don’t think He cares). But in terms of overall life choices and directions, what do you think He wants? There are probably a lot of answers to that question, but I’m thinking of one right now that I’ll bet nobody else mentioned. 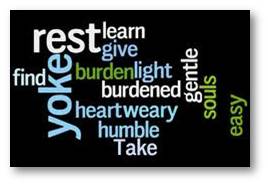 I think He wants me to quit. (It’s okay if you’re surprised.)

“Come to me, all you who are weary and burdened, and I will give you rest. Take my yoke upon you and learn from me, for I am gentle and humble in heart, and you will find rest for your souls. For my yoke is easy and my burden is light.”

The scripture above is one of the most well-known passages in the bible. It’s a source of comfort to folks who are buried under the weight of illness, despair, and impossible expectations. But it’s even more comforting when we understand the historical context.

A Rabbi’s “yoke” was his teaching, interpretation, and application of the Torah. A student or disciple who followed the Rabbi took on his yoke, meaning the sum of requirements for fulfilling the Law as taught by that particular Rabbi. The symbolism is clear; a teacher’s yoke represented the obligations and sacrifices—the “burdens” – required of his followers.

Jesus makes a related reference when He says of the teachers of the law and the Pharisees:

“They tie up heavy loads and put them on men’s shoulders, but they themselves are not willing to lift a finger to move them.”

When Jesus claims that His yoke is easy and His burden is light, He’s setting us free from the legalism, the man-made rules, and the cultural expectations that “experts” are so quick to impose. He’s telling us that following Him doesn’t involve a complicated theological code and a long list of difficult requirements.

His “yoke” is much simpler and easier. He wants us to stop all of that nonsense and focus on Him and the things He values.

Jesus wants me to quit so much of the harmful, irrelevant striving that imprisons me behind self-constructed walls of failure. He asks me to stop:

Every one of us carries the scars of an imperfect past. Perhaps it’s an addiction, or unwise choices, or abuse inflicted by someone else. Perhaps it’s your own fault or maybe it’s not. Our enemy tells us that we have to cling to the pain, seek revenge, or live in fear and guilt.

If you’re suffering under these kinds of burdens, listen again to Jesus’ simple invitation. Imagine Him standing before you with hands extended in love. Hear His words from THE MESSAGE paraphrase of the same passage, spoken softly in a voice of perfect compassion:

“Are you tired? Worn out? Burned out on religion? Come to me. Get away with me and you’ll recover your life. I’ll show you how to take a real rest. Walk with me and work with me—watch how I do it. Learn the unforced rhythms of grace. I won’t lay anything heavy or ill-fitting on you. Keep company with me and you’ll learn to live freely and lightly.”

He’s the God of a new beginning. You’re free to quit pretending and hiding in your self-imposed jail, because God knows about every moment of your past. He loves you so much that He sent Jesus to shatter the prison walls.

When Jesus was asked to state the most important commandment, the first word He uttered was, “Love.”

It is for freedom that Christ has set us free. Stand firm, then, and do not let yourselves be burdened again by a yoke of slavery.