Do not judge according to appearance,
but judge with righteous judgment. John 7:24 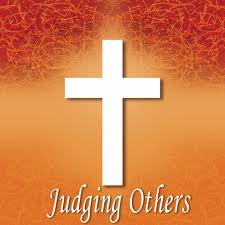 Have you noticed that one of the most popular and oft-quoted verses from the Bible is some sort of mutilation of the admonition not to judge? This is particularly popular with those who are not familiar with the Scriptures and/or want to justify their own behavior. But does the Bible really teach us not to judge, or does it simply give us guidelines in how to judge correctly?

Jesus said very clearly in John 7:24 that we are not to “judge according to appearance” but to “judge with righteous judgment.” That doesn’t sound like a ban on judging of any sort, does it? It does, however, sound like a warning not to jump to conclusions based on what we see (or hear or feel), but rather to draw conclusions based on God’s judgment, since He is the only One among us who is righteous.

So how do we do that? The entire discourse by Jesus in this section of the Gospel of John is a reminder to the Jewish people that they already have the Law of Moses as their only dependable and allowable guideline for proper judging. He also warned them against ignoring or perverting that scriptural guideline to suit their own purposes, something we are all tempted to do on occasion.

As believers who have God’s Spirit living within us to guide us in our actions and correctly interpret scripture for us, we are called to “judge righteously,” according to God’s Word. We have no right to make judgment calls based on our own opinions or self-imposed standards, but we do have an obligation and responsibility to reach our conclusions—about ourselves as well as others—based on the standards God has detailed in the Bible.

Does that mean we assault people with those judgments and wag our finger in their faces, screaming at them to repent? Of course not. But it does mean that we refuse to fall into the trap of situational ethics that basically says, “I’m okay, you’re okay,” regardless of behavior, and therefore enable people to remain lost in their sins and separated from God. We are called to preach the pure and uncompromised Good News, which does not deny sin but rather offers the only remedy—the shed blood of Christ at Calvary. That is the righteous judgment we must all proclaim, in word and deed, regardless of the response or consequences.

And, finally, it must all be done in love, with a heart that longs to see others forgiven and restored, as we have been. No one said it would be easy, but we can’t shy away from doing what is right for fear of offending others and being accused of judging. We are all guilty before a righteous God, and that’s not a judgment declared by fallible humans but rather by an infallible Creator who is ultimately the Judge of the entire Universe. How grateful I am that the only Son of that Judge is also my Advocate when I stand before the heavenly Court after my final breath! May I be found faithful to have judged righteously and proclaimed that righteous judgment during my sojourn on earth.