The city of Jerusalem was in full bloom, for it was a religious festive day. Its streets were full of excitement as pilgrims from all over the known world, came to perform their religious duties. Many were in awe as they viewed the majestic temple of that era. I can hear, a parent saying to their son, “My child, the great I AM resides in that building!” 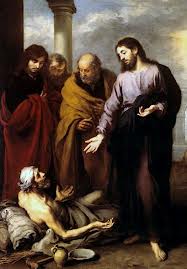 But as the mesmerized masses were focusing on the wondrous

Work build by human hands. God incarnated (John 1:1-4, 14) was entering through the back entrance of the city appropriately called the Sheep gate, for this is where the livestock were herded into the great city. We are told that near this gate was a pool of water called Bethesda (House of Mercy). And it was at this pool that laid a multitude of those who were sick, blind, lame, and withered. For it was believed that an angel of the Lord would at certain times stir up the water; whoever then first after the stirring up of the water, stepped in was made well

It was there that Jesus noticed a man who had been ill thirty-eight years.

One can only imagine what was going through this mans mind, when Jesus entered into his little world of shattered dreams. Over the years he had come to terms with his lot in life, and there was no reason to believe this day would be any different from the previous ones. But God has a way of changing one’s world in a twinkling of an eye and this day would prove to be the greatest moment of this man’s life.

We read that, When Jesus saw him lying there, and knew that he had already been a long time in that condition, He said to him. “Do you wish to get well?” John 5:6

INTIMACY
Let’s not forget that this man was just one of a great multitude, but when Jesus saw him He knew (aware of the truth) that he had been stuck in this

situation a long time. I find it refreshing to know that our relationship with God is not just a mere religious one, but it is one of deep caring intimacy. I love how Jesus describes our relationship with the Father; He says “Are not two sparrows sold for a cent? And yet not one of them will fall to the ground apart from your Father (knowing – writers insert). But the very hairs of your head are numbered. So do not fear; you are more valuable than many sparrows. Matthew 10:29-31

Be assured God knows what you’re going through.

A LONG TIME
Thirty eight years truly is a long time to be stuck in a bad place, and in a sense, his illness became his professional career. Much like the people we see standing at the off ramps of our freeways, whose tattered clothing and sad disposition compels the general public to donate funds to maintain their survival. Now, this truth not only applies to the pan handler on our streets, but like substance abuse it is disseminated evenly across all social classes.

So many good people have also created a career around an offense committed against them. When we lack the ability to forgive, or to seek forgiveness, it inevitability will give birth to a life disabled by bitterness and insensitivity. Sadly, this not only affects the carrier, but anyone who steps into their world (read – Hebrews 12:15).

As you know time stops for no one, days turn into months and months turn into years, and if we do not seek help in resolving those deep rooted issues, be assured that the day will come when the carrier of bitterness looks into the mirror and reality will stare right into his/her face. Because doing hard time has a way of etching its mark on our mind, body and soul. It is then we’ll come to realize that we have wasted so many precious years. Wise counsel instructs us that, There is an appointed time for everything. And there is a time for every event under heaven. A time for war and a time for peace. Ecclesiastes 3:1, 8b

DO YOU WISH TO GET WELL?
It seems that Jesus was moved by this mans situation. We read of other’s in the Bible who pressed through thick crowds just to touch Jesus’ garment, and other’s who out shouted the crowds to get His attention. But this man just laid there for such a long time, without even a peep.

Jesus with all wisdom asks him, “Do you wish to get well?” You see not everyone is ready for change. An excellent example of this is found in the Book of Exodus in the 8th chapter, when Pharaoh King of Egypt called for Moses and said “Entreat the Lord that He remove the (plague of) frogs from me and my people; and I will let the people (Israelites) go….” Moses then asks him, so when would you like this to be done for you. Pharaoh’s reply was a very interesting one, he says “Tomorrow!

It would seem that the answer should have been “immediately, get rid of the plague right now! ” I believe this was a valid question which is still applicable for you and I today.

May our prayer be “Lord, I’m ready for you to remove this plague from my life right now and I do wish to get well.”

I HAVE NO ONE v. 7 The sick man answered Him, “Sir, I have no man to put me into the pool when the water is stirred up, but while I am coming, another steps down before me.”

As we reflect on history, one will notice that every great individual has had to travel through many solitary valleys. When the masses had turned on him, King David had to learn to encourage (strengthen) himself in the Lord (1 Samuel 30:6)., The Apostle Paul shares of his own personal experience, “At my first defense no one supported me, but all deserted me; …….., but the Lord stood with me and strengthened me,…..and I was rescued out of the Lion’s mouth.” 2 Timothy 4:16a, 17a, c

Jesus forewarned His disciples that He too would travel through that solitary path called, The road of pain, “Behold, an hour is coming, and has already come, for you to be scattered, each to his own home, and to leave Me alone, and yet I am not alone, because the Father is with Me (John 16:32).”

It’s sad that after thirty eight years, this man didn’t have one person, who cared enough to help him out. We can waste so much precious time trying to find love and acceptance in all the wrong people, places and things. Once again wisdom tells us there is “Time to search and a time to give up as lost, a time to keep and a time to throw away. Ecclesiastes 3:6 It was time for him to find a whole new group of friends and it was going to begin with a new friend who would stick closer than a brother (read Proverbs 18:24).

GET UP – PICK UP AND WALK
v. 8 Jesus said to him, “Get up, pick your pallet (bed) and walk.”
v. 9 Immediately the man became well, and picked up his pallet and began to walk.”

GET UP
How many times have we heard people say, “You’ve made your own bed now lay in it,” But how long is one expected to lay in it? Apparently to Jesus, thirty eight years was way to long of a sentence and without hesitation He boldly instructs the man to GET UP!

I’ve always been intrigued by the God given strength that was entrusted to the Apostle Paul, one event comes to mind when the religious leaders of his time incited the crowds to stone him and then dragging him out of the city, supposing him dead. While the disciples stood around him, he GOT UP and entered the city.

Not only did he continue to proclaim the Gospel, but he began strengthening the souls of the disciples, encouraging them to continue in the faith. (Read Acts 14:19-22).

After hearing Jesus’ command of “get up, pick up your pallet and walk”, we read that, Immediately the man became well (healthy), and when taken to a higher level, it means he became a man of good standing or (un-merited) favor (Grace) with God (read Romans 5:1,2).

PICK UP
But why was he required to pick up that old tattered pallet (bed). Well, one never leaves an experience empty handed. Oh how we wish that we could just forget the past, but not so, for these experiences has become interwoven into our life and being. The only difference is that they no longer possess the power to inflict us with self condemnation (unfit for use, sentence to punishment), for God has removed its paralyzing sting. Our experiences have become trusted friends, for it is because of them, we are reminded of Gods Amazing Grace, and because of them we cherish the ability to love and to be loved… And much like a person who has learned pain by touching an open flame, experience has given us the ability to say no to people, places and things that have caused us so much grief.

AND WALK
Next we read that the man with his pallet (experience) in hand began to walk. To the naked eye, it would seem that he was ill prepared to enter into the so called “normal world.” But not so, for as I studied the scriptures I found out that experience (proven character) produces an ingredient very essential to assure one’s success in life, which is Hope. (Read – Romans 5:1-6).

Now as I sought for the definition of the this word Hope, I found that it had a two fold meaning which consists of, An expectation of evil and an expectation of good, (Strong’s Greek concordance) and if we can allow ourselves the liberty of meditating on what was just written, you will see how well equipped this man truly was as he walked into his God given destiny here on earth.

I believe he understood that, yes, in his new journey he should expect many obstacles and hardships, but he also expected God to see him through them. This is a very important fundamental truth for you and I to apply in our lives. For yes, people will come against your new attitude of mind, but may our prayer be, “Let them curse, but You bless *me (*writers insert – Psalm 109:28).” Once again experience teaches us that bad things can happen to good people, but Hope says, “But as for me, I will watch expectantly (in hope) for the God of my salvation. My God will hear me. Do not rejoice over me, O my enemy. Though I fall I will rise, though I dwell in darkness, the Lord is a light to me.” Micah 7:7, 8

As a Christian, my Hope is based on Jesus’ life, death and resurrection. For this teaches me that there is no valid reason for anyone to be stuck in a bad place for thirty eight years. For the same Spirit that raised Jesus from the dead dwells in us (read – Romans 8:11)

And if you ever are tempted to slip back into that miserable place, please listen to experience and say to yourself “I just ain’t got the time for that!” Then keep walking.

Your friend always in the Journey