If we grew up in an atmosphere of instability, with much yelling and cursing, it can be so hard to trust that we can ask for our needs to be met and have that request answered without anger, let alone without mockery and humiliation coming our way.

This, at least, is how it was for me when I first thought of asking God for anything. So how could I ever admit to my Heavenly Father that I did not understand His Word, the Bible? Wouldn’t He get angry, yell at me, and call me stupid, just like my earthly father had done? Not according to James 1:5 NLT: If you need wisdom, ask our generous God, and he will give it to you. He will not rebuke you for asking. This sounds wonderful: Wisdom for the asking, anytime I need it!

However, there is a slight catch:But when you ask him, be sure that your faith is in God alone. Do not waver, for a person with divided loyalty is as unsettled as a wave of the sea that is blown and tossed by the wind. Such people should not expect to receive anything from the Lord. Their loyalty is divided between God and the world, and they are unstable in everything they do. James 1:2-8, NLT

So God is asking me to lean on Him alone for my understanding, not on the world’s ways. For He wants my heart, and He does not want me to have one foot planted in His Kingdom and the other foot planted in the world, afraid I may make a mistake. In other words, God does not want me to be a fence-sitter; He wants me to make a full and complete commitment to Him and Him alone as Saviour and Lord of my life, and not have one leg still dragging behind in the world. Does this seem extreme? Does God hate the world?

No, God does not hate the world. He loves its people so much that He sent His only Son to die for them: For God loved the world so much that he gave his one and only Son, so that everyone who believes in him will not perish but have eternal life. John 3:16, NLT 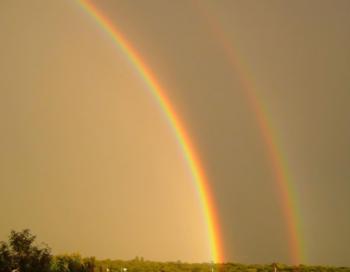 Praise God that when we trust in Jesus and invite Him into our hearts as our Lord and Saviour, He transfers us out of this world and into His glorious Kingdom of Light: or he has rescued us from the kingdom of darkness and transferred us into the Kingdom of his dear Son, who purchased our freedom and forgave our sins. Colossians 1:13-14, NLT We become members of His Heavenly Kingdom in the spiritual realm.

Physically we are used by Jesus as His body, His hands and feet here on earth, to spread His Good News of salvation to those who have not heard or received the message. This is why, Satan, the leader of this world hates us so much! We want to take from him those who are in the grip of his lies – the unbelievers – and allow Jesus to deliver them into His Light, just as He has delivered us!

To fight this good fight of faith, we need to have both feet planted firmly on the Rock of our Salvation, Jesus Christ, and our minds renewed daily in His Word. And when we are faithful about doing so, we joyfully do what may now seem impossible: Dear brothers and sisters, when troubles come your way, consider it an opportunity for great joy. For you know that when your faith is tested, your endurance has a chance to grow. So let it grow, for when your endurance is fully developed, you will be perfect and complete, needing nothing. James 1:2-4, NLT

How do we find the strength, the courage? Whenever we are tempted, we turn to the Lord for His help, reminding ourselves that Temptation comes from our own desires, which entice us and drag us away. These desires give birth to sinful actions. And when sin is allowed to grow, it gives birth to death. James 1:14- 15, NLT

Then, let’s fix our minds on Jesus and His Word and joyously call to mind the promise the Lord has given us: God blesses those who patiently endure testing and temptation. Afterward they will receive the crown of life that God has promised to those who love him. James 1:12, NLT Amen and Amen!

~ BAPearl is a member of CIR.