1 Corinthians 13:5a RSV
[Love] is not arrogant or rude. Love does not insist on its own way…

The KJV translates this phrase: “Charity (love) doth not behave itself unseemly.” This certainly isn’t a phrase that we use much anymore. In fact, to be honest, we’re not very concerned at all about behaving in a courteous or seemly manner in our society. To behave “seemly” is to conform one’s behavior to standards of conduct and good taste. As our moms used to say, it means simply to behave properly and according to good manners. 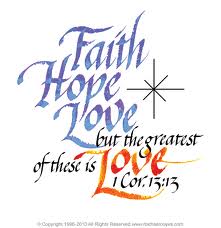 So the scripture here is actually more than just not being arrogant or rude, though I truly believe that rudeness is motivated by arrogance, the idea that it’s “my way or the highway.” When we are arrogant, we do what we want and say what we want without regard to the effects that it might have on other people. In other words, we simply don’t care about anyone else (at that moment), only about ourselves, our rights, our opinions, our own actions.

“Of course,” you might say, “that isn’t love. Love considers others.” But the fact is, we are often rude, callous, unthinking, inconsiderate. In an effort to be popular, to be right, to be superior, we push ourselves onto others, either through unthinking behavior or through bombastic opinions. We are crass, sarcastic, overbearing… and proud of it.

Look at how “modern” people are depicted on television. They are neither humble nor do they live to serve others. They flaunt themselves and their own agendas. And, to our demise, we follow their example.

I think we have chosen terrible role models.

Yes, our Lord Jesus spoke out against that which was wrong, but only when His enemies first came to engage Him (in an effort to discredit Him). Look at the Lord’s interaction with Nicodemus in John 3. He didn’t condemn Nicodemus, but rather led him gently to the truth. Christ Jesus was so persuasive in His conversation that Nicodemus became a disciple, a follower. The Lord Jesus could have simply condemned him or made fun of him, but He didn’t.

Love has, at it’s core, concern for the other’s welfare, for the other’s feelings, for the other’s eternal condition. It doesn’t “perform” (through silly jokes or coarse words), but rather is always seeking to minister. We need to remember that what one considers funny, another may consider offensive (rude). Rather than have our own personality stamp that we insist others accept (“Well, this is just who I am”), we need to be sensitive and meet others where they are.

I can remember going to dinner at the home of friends (actually, my parents’ friends) and eating whatever was put on the table. My one adopted “aunt” almost always made tuna casserole, probably because money was tight and it was cheaper to feed nine of us with tuna casserole than steak (which would have been my cavalier choice).

My mom always insisted (quietly and firmly) that I clean my plate as a sign of respect and gratitude for the food (and the invitation).

Too often, these days we insist on our own way. Remember that old Burger King commercial: “Have it your way.” We think that life is like that, that everyone around us needs to accommodate our own likes, our demands. When, as Christians, we should instead be grateful for whatever the Lord provides (in every situation) and be looking for ways to reach out and minister to those around us.

Love does not insist on its own way.

We should be falling over each other in attempts to allow others their way, while refusing to have our own. Our Lord Jesus walked the painful and horrible road to the cross because He was willing to set aside His own will and do the will of someone else (the Father):

“Father, if thou art willing, remove this cup from me; nevertheless not my will, but thine, be done” (Luke 22:42 RSV).

The entire life of the Christian should be about setting aside our own will, our own desires, our own needs even, and doing the will of the Father which means ministering to others by allowing them to have their way.