Recently, I watched the 1940 adaptation of “Our Town” by Thornton Wilder. It follows the lives of its Grover’s Corner citizens. 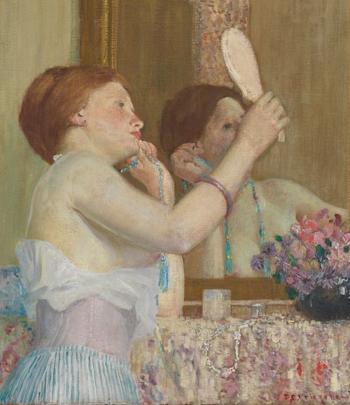 And that includes a young girl, Emily. There was a particular conversation between Emily and her mother which caught my attention; it’s one, to a certain degree, which is echoed between many mothers and daughters now. It’s about being pretty.

Emily asks her mother, “Am I pretty enough to get people interested in me?”

My ears perked right up, along with many mixed emotions about the question. Having experienced struggles with body and self-image, as well as eating disorders, the “pretty” question is far from pretty.

Years later, I’m still befuddled by the importance of it. Is it a real human desire for females or is it learned?

Scripture tells us appearance’s importance is a part of life here:

“…Look not on his countenance, or on the height of his stature… for the LORD seeth not as man seeth; for man looketh on the outward appearance, but the LORD looketh on the heart.” 1 Samuel 16:7

So, God desires us to be “pretty on the inside?”

Somehow, however, that doesn’t quite jive by the time we reach adolescence. High school often teaches us numerous lessons on who is pretty… and who is not.

Indeed, as a little girl, my mother and I often had discussions or “rating systems” on which of my female peers were “cute,” “pretty” or “beautiful.” It wasn’t just about judging or picking apart facial features. It had to do with being worthwhile.

Because, “being pretty,” largely involves acceptance, being chosen. And isn’t that what we long for? We spend our lives chasing that chosen feeling/reality.
I’m not against beauty; I understand its importance. Who doesn’t enjoy looking at something or someone who is aesthetically pleasing?

But I cringe at the extreme importance placed upon “being pretty,” often to the exclusion or negation of other valuable attributes: kindness, personality, spirituality, talent and intellect, for instance. We’ve heard about the pretty girl who dumbed down and downplayed her own intellect/scholastic achievement, just to be approved of and accepted by a good looking boy or a pressuring peer group. She wanted people to be interested in her. And, instead of letting those non-physical qualities stand out, she believed the lie that all she had to offer was her looks. That’s where her worth resided.

As I watched “Our Town,” I encountered a lot of antiquated mindsets, especially concerning male and female roles. It’d be great to think about how far we’ve come since then. It’d be great if we could see advancement and equality, enlightenment for all individuals where intrinsic worth wasn’t judged by outward appearance.

Sadly, we’re not there. As sweet and endearing as that mother/daughter “pretty” discussion was, it still rings uncomfortably true to this day as the emphasized factor for a girl’s worth. “Pretty” is still so important. There is an absence of the “smart,” “witty” or “kind” questions when it comes to a female’s value.

And that is a shame. We are spiritual beings. We are who our spirit is, not what our faces and bodies look like.

“Pretty,” by itself, is an adjective, not an end-all, be all of individual worth. You and I can be pretty, but that should not be where we end. There’s too much more to us. We need to tap into that. God created incredible beings. He wants us to discover ALL of who we are, not just stop at appearance.

As inherently valuable creations of the Most High God, you and I are enough, AS IS, to be interesting to others and to be worthwhile, regardless of another’s acceptance or rejection. Valuable… and wonderful, AS IS!!!

This is who we are! Fully own and enjoy that Truth today!!!