Brennan Manning loved to refer to the Gospel as the Ragamuffin Gospel. I always liked that! Why? 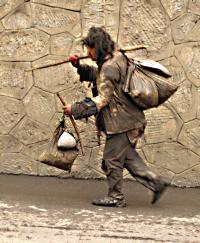 I didn’t come to Jesus with any piety or with the veil of religious performance. I was completely surprised when I encountered Jesus. He was totally other than my immature image of Him! And I had hit “my” bottom as a drug addicted Hippie. My home was the streets.

Jesus took me in through the love and hospitality of two of His Ragamuffin Saints. And He immediately sensitized me to the realities of being drawn into Him. He threw out the welcome mat to my heart to be at home in Him. I had no theology. Not even the slightest pretense of having a clue about my life “purpose” or “worth.” I was entirely “clueless!”

Brennan Manning eloquently communicated the Gospel of Grace without even a hit hint of religious pride. And he never wavered or compromised it. Instead; he was faithful to the message of grace through his own personal struggles, failures and shortcomings. The following quote succinctly captures the essence of Brennan’s life message!

Because salvation is by grace through faith, I believe that among the countless number of people standing in front of the throne and in front of the Lamb, dressed in white robes and holding palms in their hands (see Revelation 7:9), were the prostitute from the Kit-Kat Ranch in Carson City, Nevada, who tearfully told me that she could find no other employment to support her two-year-old son.

I shall see the woman who had an abortion and is haunted by guilt and remorse but did the best she could faced with grueling alternatives; the businessman besieged with debt who sold his integrity in a series of desperate transactions; the insecure clergyman addicted to being liked, who never challenged his people from the pulpit and longed for unconditional love; the sexually abused teen molested by his father and now selling his body on the street, who, as he falls asleep each night after his last ‘trick’, whispers the name of the unknown God he learned about in Sunday school.

“But how?” we ask. Then the voice says, “They have washed their robes and have made them white in the blood of the Lamb.”

There they are. There *we* are – the multitude who so wanted to be faithful, who at times got defeated, soiled by life, and bested by trials, wearing the bloodied garments of life’s tribulations, but through it all clung to faith.

My friends, if this is not good news to you, you have never understood the gospel of grace.

Enraptured by the love of Grace,