by Andrea Schwartz
Love at first sight may seem to work out perfectly in novels and film, but rarely are first impressions true or lasting. Along with this myth comes the illusion that family background, religious orientation, and lifetime experiences are of little-to-no importance when it comes to committing to lifelong marriage. Young people smitten by the love bug believe the age-old lies that love will keep them together and that love is all they need. However, doing things God’s way remains the touchstone for successful covenant marriage. 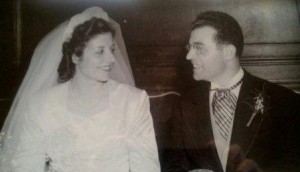 The Bible provides definite guidelines for entering into the most intimate of all human relationships. Among them are: chastity before marriage; the dowry presented to the girl’s father demonstrating the husband’s ability and willingness to provide for the new family; exemption from military service for the man for a year’s time; specific times and circumstances when the couple is to refrain from marital intimacy; and specific consequences for offenses within the marriage. In addition, the education for the children, residential proximity to family, along with perspectives on nutrition, finances, medical care, indebtedness, etc. will play into the success or failure of the marriage.

I wonder how many couples are counseled to explore ALL of these and other matters before deciding to marry? More time is spent on selecting invitations and a venue for the reception. The wedding receives a lot of attention, much more so than the ensuing marriage.

Most marriage vows include the phrasing, for better for worse, for richer for poorer, in sickness and in health, until death do us part. Too few really fathom what this could entail. While young couples are newly smitten and head over heels in love with each other, they and their counselors downplay how bad things can become in their relationship. But the loss of one’s job, one’s health, the illness or death of a child, or even the loss of the spark of romance are rarely, if ever, considered ahead of time. The rising divorce rate, even among professing Christians, speaks to this fact.

Some argue that it is impossible to prepare for all contingencies at the outset of a marriage. While the particulars can’t be known ahead of time, the manner in which circumstances will be dealt certainly can. Will God’s law be the standard for making decisions, or will personal convenience and preferences rule the day? Will a mutual respect be maintained for each other’s family so that both spouses are willing to receive counsel from family members when problems arise?

My father often spoke of the counseling he and my mother had prior to their marriage when he would explain decisions that were made in our family. How we were educated, where we lived, the sort of medical practice he would have — all were matters of faith to him, and all were discussed with the family. He took his responsibilities to my mother seriously, so much so that when she became an invalid after a series of strokes, he converted our living room into her room and she remained at home rather than take many family members’ advice to put her in a managed care facility. Growing up, there were times I resented this intrusion into normal living. But as an adult, I see that he took his commitment to her seriously — that he would be her provider and caretaker for worse, for poorer, in sickness, until death parted them. Years later he remarried, and again his commitment was tested when his second wife suffered a stroke. He continued to care for her for thirteen years until he was almost 90 and no longer able to provide suitable care because of his own health issues.

Marriage is not just a contract/covenant between two people; it includes their families as well. This is apparent when nasty divorce proceedings demonstrate how the extended family is often adversely affected by the choice of a husband or wife, not to mention the impact on the children.

Parents should teach their children the realities of marriage by example and instruction. Family members being involved in the earliest stages of any courtship will bolster the chances that good counsel can follow in the case of disagreements. A courtship should be long enough so that there are opportunities for conflict and Biblical resolution to arise, as well as the behavior of the man and woman examined and discussed. Rather than fall in love, the couple can step into marriage knowledgeably.

R. J. Rushdoony prayed eloquently after a teaching on the Doctrine of Marriage:

OUR LORD AND OUR GOD, we thank Thee that thou hast established and ordained marriage for the welfare and happiness of mankind. We thank Thee that Thou hast called us into Christian marriages, made us husbands and fathers, wives and mothers in Jesus Christ. Bless each home that is here represented that by Thy grace we may grow and mature in terms of our calling, rejoice in one another in Thee and under Thee, and might all the days of our life know the joy and the strength that comes from being heirs together of the grace of life. Bless us to this purpose, in Jesus’ name. Amen. *