He who conceals his transgressions will not prosper. But he who confesses and forsakes them will find compassion. Proverbs 28:13

Pinocchio – the adorable little story about a marionette who wants to become a real boy. It touches on this real theme, as well as the power of dreaming and the ability to love. 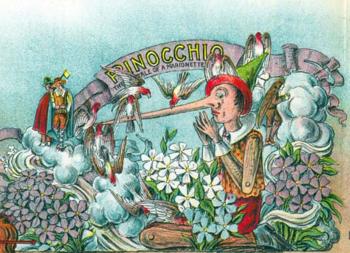 And yes, there’s also the lesson about lying, hence Pinocchio’s growing nose every time he tells a fib.

And that reminds me about the often chaotic journey of recovery when it comes to our addictions, compulsions and issues.

A lot of us having growing noses, don’t we?

Addiction – related issues are subtle, tricky things which seem to sneak up on us from “out of nowhere.” A lot of us may not look “the type.” We may not look like such creatures as an alcoholic, a drug addict or a person struggling with eating disorders. We may appear to have “normal” looking noses, so to speak.

In my case, I have a short turned up nose. In fact, I don’t have a bone in it, which allows me to press it down and completely flatten it. It’s a great party trick. I mention this, not so you can stare at my nose and be entertained by its flatness. I mention it to illustrate how things are not as they appear.

Me, the nice girl who “looked” like everything was fine, was, in reality, a desperate, struggling, lying sufferer of all things eating disorder. And, due to an inaccurate estimation of damning shame and failure, I believe I needed to lie about my condition instead of seeking help for it.

So, there I was, “no-nose Sheryle,” getting a bigger spiritual honker by the second as I repeatedly attempted to convince everyone, myself and God included, of how I was “fine.”

But what’s the old saying? Confession is good for the soul. Indeed, it is a major recovery principle.

Confess your faults one to another, and pray one for another, that ye may be healed. The effectual fervent prayer of a righteous man availeth much. James 5:16

We have to get real. And most of us have a lot of trouble doing just that. We are driven by perfectionism, expectation, failure, image and unmet need. We lie to ourselves about just how important those things are to us. Repeatedly spouting how “we’re fine” won’t bring healing.

If we say that we have no sin, we are deceiving ourselves and the truth is not in us. If we confess our sins, He is faithful and righteous to forgive us our sins and to cleanse us from all unrighteousness. 1 John 1:8-9

There’s an Ethiopian Proverb which also echoes that Truth:
“He who conceals his disease cannot expect to be cured.”

Admitting we have a problem is the cliché beginning point. Growing a harmful, self-destructive nose of our chosen addictions can only lead to a dead end.

God is for us, not against us (Romans 8:31). But He works best with our willing honesty. It can be brutal, embarrassing and laced with all kinds of fears.

But God is a healing, redemptive God.

And like Pinocchio, He wants to turn our healing from fake to real.

The challenge lies within our Pinocchio selves. Will we let Him do just that? Will we stop telling the harmful lies which make our self-destructive choices grow?