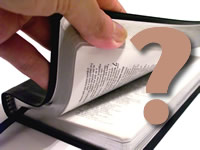 That idea took some adjustment—it’s tough, removing yourself from the center of the universe. I had to re-learn how to understand the Bible. I’m pretty sure I still don’t really get it, but over the past few months I’ve been trying to summarize my simpleton’s guide to interpreting Scripture.

I’ve learned that interpretation is a three-step process.

The key thing I learned here is to remember that the scriptures weren’t written in modern English. Subtleties are often lost in translation, so real understanding requires some digging.

I need to understand the original audience and what the writing meant to them. I’m not real big on ancient history, so I’d rather just skip this step. But if I really want to hear God’s word, that’s not an option.

I love big, obscure words. They’re a great substitute for actually knowing something. In my Bible study group I can toss out the term hermeneutical theory and sound like a genius. Of course there’s a risk—someone might ask what it means. I’m sure it’s an urban myth that hermeneutics was originally invented by some German guy named Herman.

As I understand it, hermeneutics generally involves applying Scripture to specific situations. It’s got its own specialized techniques and schools of thought, but for me the basic understanding is pretty simple: this application is the third step in the process. You don’t get to skip the first two parts.

Failure to adhere to this basic interpretation structure accounts for many errors, misunderstandings, and flawed arguments. It’s just not possible to correctly apply Scripture without accounting for issues associated with original language and audience.

At first this realization was discouraging. I figured I’d never know enough to really understand the Bible.

But then I realized that, like most important things in life, it’s a process. I don’t have to be an expert, but I do have to be willing to ask, to study, to admit when something doesn’t make sense.

I think God wants us to understand. I’m amazed at what He shows me when I show up with an open heart, when I drop my agendas, when I try even a little to listen to what He’s saying.

I think that might have been part of what Jesus was talking about (Luke 11:10) when He said, “For everyone who asks receives; the one who seeks finds; and to the one who knocks, the door will be opened.”

I think that promise is still good.

How do you know what the Bible means in your life?