Dave walked through the door with divorce notice in hand. He’d not expected it, though he had told me he wanted a divorce eventually. But this way? This time?

One of the gifts of friendship is to be there for another when needed — in bad times as well as good times. 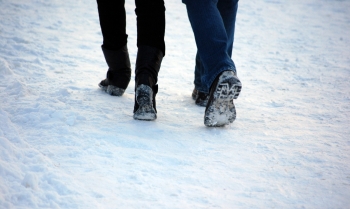 So it was that the journey began-walking a friend through divorce. Interestingly, having made this trek with others down through the years, I have reached the conclusion that all divorces are different, all divorces are the same.

Attempting to locate the sameness in what lay ahead for the two of us, I discovered again the journey’s various bends:

“I hadn’t counted on this on an otherwise good Friday,” he blurted out. “Here. Read this.”
Every line. Every detail. Ever box checked. Every notation made. It was not only for Dave to take in; it was there for me to digest alongside him.

Friendship does that. Specifics otherwise irrelevant become relevant if you want to mesh with the situation. Selflessness enables that. Selfishness prohibits it. Which will it be when asked by a friend to put your footprints into his when walking through the divorce mist?

The emotional mix is heavy at this point — for both the one receiving the divorce notice and the friend sharing the unknown-to-be. Shock followed by relief. Not easy. But the emotional rush is moving fast, skewing the internal networks big time.

“I told you that I someday wanted to leave that woman. She’s nothing but pain. It’s been awful. I don’t want to go back to any of that,” Dave gave forth slowly but deliberately.
He had moved out from his wife some months prior; but anything further than that was not in his practicality yet. So the divorce notice brought matters to a head — action instead of “putting on hold till another time.”

When situations are especially bleak, we tend to conclude that everything about them was terrible. In rare instances that is true; but usually life turns up a complex mixture of negative and positive.

“I remember the times we went boating and hunting. We enjoyed the same outdoors life together. There were the walks in the woods, the camping out, the jotting down rare birds at the feeder.” Dave thought back over the sunlighted highlights — all real — all his — and hers as well.

“I feel sad,” he said, staring at the carpet. His words, with measured pauses, were spelled out slowly.

“You feel like a failure?” I asked. “Yes,” was his reply. “A failure. The marriage was a failure. I hadn’t counted on that fifteen years ago. I had counted on a marriage for life. And now this. This!”

Who failed? Had she failed? Had he failed? Were they both to blame in failure? Who had not tried hard enough? Who set the failure motion on its edge? Who brought down the castle?

Why? Why? Why? “Why did this have to happen to me? I’m not used to failure — in anything.”

“I’ll phone my family this evening,” he thought aloud. So that would mean spelling the detail of failure and shame. That would mean reaching out to parents and siblings for their arms to embrace. It would mean seeking harbor within the household.

Dave knew that family would be there for him. They had known of the difficulties in the marriage. They had seen into the future some forecasts that Dave could not seen for being in the center of the circle. So when he would phone them, much of it would not be a surprise to them.

Nevertheless, Dave carried the shame weight with him in dialing their number. He wanted to shake it off; but it remained for the time being, at least until time had passed for him to deal more rationally with that emotion.

“Do you think it would be better for you not to go with us tonight?” I asked.
“I’ll go. I need to get my head on something else other than this divorce notice,” he answered.

For him, he had made the correct decision. Dave is gregarious. He likes laughter and new faces and fresh conversation. Therefore, for him to become an evening recluse would not have been in his best interest.

Nevertheless, he had to start balancing out the ranting-raving confusion inside with the social niceties approaching for the evening.

But what Dave had not counted on was her calling the shots on the finality of divorce. He had thought that he would be in the driver’s seat on that score. However, she beat him to the punch.

“It will become more clear to you, Dave, that was has happened today is just what you have desired for months. You have told me that yourself. I heard you saying that the marriage was done with. Your senses told you clearly that there was no repair. Now she is doing you a favor by carrying the legal weight on all this,” I said. “You will finally realize that what is happening today is a blessing in your favor.”

“I hear you. Once I get that through my head, I think I’ll be better about this whole thing. It’s just that I can’t get hold of all these things at the same time. My head’s racing from one matter to another. And my feelings are all jumbled up.”

“That’s to be expected. And that will go on for some time. You have to be patient then with yourself. Let your emotions fly out and calm down and then flare up again. Let your thoughts do the same. Eventually, focus will come.

“Further, your faith in God will help you. You believe that God is in your life now, though prior to this crisis you did not care about having a friendship with God. However, you have stated yourself that if it had not been for this crisis, you would have continued on your without-God lifestyle.”

“You’re right. I know that there is much pain to this whole thing. Some of it I brought on myself. And now I have had to face reality — the truth — about myself, my selfishness, my failed marriage, a lot of things that I had postponed because I was caught up in things that were stupid and self-serving.”

On the way home, Dave told my wife and me: “I feel better. It was what I was supposed to do tonight. I was to get out, talk with other people, not hole up in my apartment, and so let myself start to ride the waves’ crests.”

“Ride them out,” I advised. “Ride them out. God is in the waves. Let Him govern them. You ride them out, in faith. And you can count on us to be there with you.”