Over the years, I have learned about boundaries and the discernment needed in determining when to stay and when to go.

“And whosoever shall not receive you, nor hear your words, when ye depart out of that house or city, shake off the dust of your feet.” Matthew 10:14; Mark 6:11 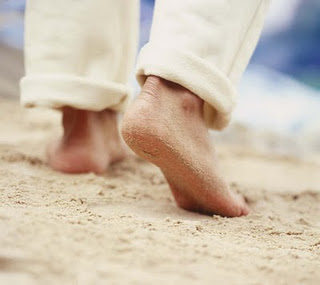 These scriptures often deal with the spreading of the Gospel. And that is certainly the case. But I also see them applying to addiction/recovery matters as well.

1. We admitted we were powerless over a substance or behavior ─ our lives had become unmanageable.

Step One challenges our “I have this under control” lie we often tell ourselves.

I have encountered this from close family members, most specifically, my mother.

I was rather late arriving to the therapy party when it came to addressing my disordered eating/image issues. I wasn’t in therapy as a skeletal anorexic, an impulsive bulimic or a ravenous overeater. No. It was a matter of “years later” when I finally decided I needed to face personal issues about myself. And I did it alone.

I did it alone because, when it came to dealing with those unpleasant and difficult issues, my family was unwilling to participate in unflattering truth’s revelation.

I first encountered this as an emaciated anorexic.

My mother made daily threats about sending me to treatment.

Did you catch that?

“My mother made daily threats about sending me to treatment.”

Mom was insistent in telling me I was the problem who needed to get fixed, not anyone else.

A morbidly obese woman, stress eating, glossing over intergenerational abuse, addiction, anger and depression tells me everything and everyone else is hunky dory. I’m the only problem disrupting life.

Was this her intentional message? No, probably not.

Nevertheless, the hypocritical and hurtful sentiment resulted, reinforcing my toxic mantra, “It’s all my fault.”

My mother, in opposition of step one, fully asserted she was powerful over her issues, managing her own life quite well, thank you very much.

Many years later, when I told her I entered therapy, her response remained unchanged. She insisted she didn’t need therapy like I did.

And even when my book, “Thin Enough: My Spiritual Journey Through the Living Death of an Eating Disorder” was published years ago, she wasn’t entirely thrilled about its reality.

Yes, to a certain degree, she was proud of the accomplishment.

But she was also nervous about its existence. She confessed to me that, before she got my book, she didn’t want her name mentioned; she didn’t want people to know who she was.

And, as I asked her about how she felt about her own struggles and unresolved issues, this was her response:
“I’m dealing real good. We can’t live in the past.”

Okay…
Again, the conversation between the two of us hit an impasse. Mom was emphatic that, if she ever had a “weight problem,” everything was cured.

Nothing more to discuss.

With the Twelve Steps, I encountered another obstacle concerning my “kin:” the spirituality issue.

Steps Two and Three, indeed, emphasize our mindset and connection to it.

2. We came to believe that a Power greater than ourselves could restore us to sanity.

3. We made a decision to turn our will and our lives over to the care of God as we understood Him.

Therefore, right away, we can bump into someone with a dramatically different perspective.

… what fellowship hath righteousness with unrighteousness? And what communion hath light with darkness? 2 Corinthians 6:14

Years ago, I was conversing with a family member who came from an atheistic point of view. We weren’t even discussing “spiritual” things. We were talking about current events. But, no matter what we talked about, he was convinced life was meaningless and had no Higher Power whatsoever.

His mind was made up. That was that.

“Can two walk together, except they be agreed?” Amos 3:3

I gave him to The Most High. He could do a much better job reaching my relative than I could.

Amos 3:3, indeed, covers a lot of territory, permeating much of the Twelve Steps. Never underestimate the power of decision making and agreement.

Some people, unfortunately, never get there. Some people are slow to arrive at that place.

Regardless, the steps, including Steps Four through Ten, require the decision making and agreement with the Higher Power perspective.

4. We made a searching and fearless moral inventory of ourselves.
5. We admitted to God, to ourselves, and to another human being the exact nature of our wrongs.
6. We were entirely ready to have God remove all these defects of character.
7. We humbly asked Him to remove our shortcomings.
8. We made a list of all persons we had harmed, and became willing to make amends to them all.
9. We made direct amends to such people wherever possible, except when to do so would injure them or others.
10. We continued to take personal inventory, and when we were wrong, promptly admitted it.

But make no mistake, there is a vast difference between deciding/agreeing and attempting to achieve our representation of perfection. Elohim knows better than to expect the latter from us.

Nevertheless, there is the desire from The Most High that we will take responsibility for our actions and move toward health, not away from it.

Again, for me, a large challenge is the strong denial streak running throughout my family structure. There are active addicts and users. There are still lies covering decades of trauma.

There is still the mindset of, “Well, at least I’m not as bad as he/she is.”

The question persists: why is one addiction better or worse than another?

Therefore, there’s no sliding scale of that addiction object at hand; for instance, alcoholism is not legitimately “worse” than food addiction. A shopping addiction is not “worse” than gambling. They are all equally serious and painful afflictions.

I have childhood memories of one family member’s repeated detox stints. I remember before we checked her into the treatment facility, I needed to find all bottles of mouthwash in her home and dump them out. This family member, when out of liquor, drank Scope and Listerine.

But this was no more of a painful circumstance than that of another relative’s battle with his substance abuse. In a severely altered state, this relative decided to go horseback riding at night and was almost run over by yet another family member’s car.

Yet no one discussed any of these realities. It was the understood, silent agreement of “If we don’t talk about it, we won’t have to deal with it.”
When that is the consensus, there is little that can be done. And that further hinders us in Step Eleven…

We sought through prayer and meditation to improve our conscious contact with God as we understood Him, praying only for knowledge of His will for us and the power to carry that out.

Of course, if the mentality is silence when addressing fellow human beings, how could there ever even exist an openness to The Most High to acknowledge, deal with and change behavior? Meditation, prayer, deep self-reflection?

Repeatedly, within my family experience, it appeared no one was doing any such thing.

But that did not impede the fact family regularly attended church and held leadership positions.

It was maddening to behold. Scripture stating “a form of godliness, but denying the power thereof” (2 Timothy 3:5) was never far from my thoughts as I heard about a relative’s “Christian” Sunday behavior, followed by their monstrous addictive actions destroying Monday through Saturday.

And again, no one talked about this.

The subject matter I initially brought up in “Thin Enough” seemed to startle a number of my family members. One relative even secretly mentioned how glad she was I revealed the addictive and abusive dynamics which had existed for decades.

Still, this family member did not openly support me and the recovery message I was coming from in the presence of other members. When it came to facing the family “at large,” I was still very much by myself.

Much of that, I believe, had to do with the fact that the recovery message I was coming from could only coexist with the acknowledgment of truth, even if it was ugly truth.

I have family in various stages of addiction and recovery. Some are acquainted with the Twelve Steps. I have no idea, though, to what degree they have embraced and applied those steps. That is individual choice.

But, based upon my personal experience with familial interaction, one of accusation, hostility and name calling, I can only conclude the majority of them are not ready to face or live those tenets, especially that of Step Twelve:
Having had a spiritual awakening as the result of these steps, we tried to carry this message to addicts, and to practice these principles in all our affairs.

It is a challenge to me to realize and maneuver around one lonely truth, especially concerning fragile recovery: not everyone is on the same page- or even in the same book.

I, therefore, must navigate this imperfect terrain fully recognizing I will have to limit my interaction- and my expectations of- my family. If I want to be in a safe space of health and support, sadly, right now, it does not exist within my family.

I have not achieved any perfection in recovery myself. Flaws are as much a part of the recovery process as great strides are.

Still, I come to recognize the power of my own literal – and symbolic – feet.

“And whosoever shall not receive you, nor hear your words, when ye depart out of that house or city, shake off the dust of your feet.” Matthew 10:14; Mark 6:11

I have the power, the right and the inherent human worth to go elsewhere, to go to greater places of healing and health.

So, sometimes, the dust must be shaken.