There are usually two sides:
the one dangerous–the other safe;
the one is uncertain–and the other is sure.

It is always the wisest–to be found on the safe side! 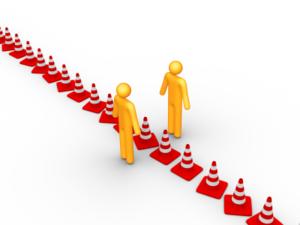 Look at the unbeliever:
He denies the Bible to be God’s book.
He walks by his own reason.
He gratifies his senses and his lusts.
He lives in sin.
He must soon die.
He has no Savior.
He has no true hope.
If the Bible is false–then he is safe; BUT
if the Bible is true–then he is damned forever!

He is certainly not on the safe side!

There are many things in the Bible which he does not like.
He is prejudiced against it.
It never prophecies good concerning him–but always evil.
It requires him to change his present sinful course–but he loves it.
He loves sin–and the Bible condemns it.
He gratifies the lusts of the flesh–and the Bible bids him to mortify them.
In a word, there is as much opposition between the Bible and him–as between light and darkness, holiness and sin, truth and error. Therefore he hates it!

At the best, with him all is uncertain, unsatisfactory, and vexatious.

He is certainly not on the safe side!

Now look at the true Christian:
He believes the Bible to be from God. He has examined it. He has evidence of its inspiration in his heart. He fully believes it.
What the Bible says of himself as a sinner–he knows to be true.
What it says of Jesus as a Savior–he has proved to be a fact.
As guilty–he has applied to God for pardon, and obtained it.
As impure–he has sought the cleansing operations of the Holy Spirit, and has experienced them.
His guilt is gone–therefore he has no slavish fears.
His soul is justified–therefore he has peace with God.
He approves of the inspired precepts–and regulates his life by them.
He carries his cares to God–and is sustained under them.
He realizes that God is his Friend, his Father, and his everlasting Portion.
He is peaceful.
He is often happy.
To him death has no sting–and eternity has no terror.
He knows Jesus as his Savior–and trusts in Him.
He knows God as his Father–and walks with Him.
He knows the Holy Spirit as his comforting Teacher–and listens to Him.

He is, perhaps, more tried than the unbeliever–but he has supports, consolations, and pleasures–of which the unbeliever knows nothing. He lives to bless others, to honor God, to prepare for a glorious immortality.

He would not change his worst day–for the unbeliever’s best day!

He is on the safe side!

If the unbeliever should be right–then the Christian is no loser.

But if the Christian is right–and he is–then the unbeliever is the biggest loser–an infinite loser!

Reader, on which side are you? There is but one safe side.

There is no safety for a sinner now–but at the Cross!

There will be no safety at death and judgment–but in Christ!

There will be no changing sides then!

But when the Son of Man comes in His glory, and all the angels with Him, then He will sit upon His glorious throne! All the nations will be gathered in His presence, and He will separate the people as a shepherd separates the sheep from the goats. He will place the sheep at His right hand–and the goats at His left.

Then the King will say to those on His right, ‘Come, you who are blessed by My Father–inherit the Kingdom prepared for you from the creation of the world!’ (the safe side)

Then the King will turn to those on the left and say, ‘Away with you, you cursed ones–into the eternal fire prepared for the devil and his demons!’ (the perilous side)