Isaiah 43:10-13
“But you are my witnesses, O Israel!” says the Lord. “And you are my servant. You have been chosen to know me, believe in me, and understand that I alone am God. There is no other God; there never has been and never will be. I am the Lord, and there is no other Savior. First I predicted your deliverance; I declared what I would do, and then I did it — I saved you. No foreign god has ever done this before. You are witnesses that I am the only God,” says the Lord. “From eternity to eternity I am God. No one can oppose what I do. No one can reverse my actions” (NLT). 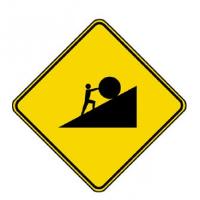 I wish — I truly wish — that life were like a 60-minute TV show where the dramatic problem is presented, the villain is revealed, and all is wrapped up for the heroes to live happily ever after before the final commercial. But life isn’t like that. And the longer I live, the more I’m convinced that life is messy, sloppy, sometimes miserable, and usually unintelligible. There simply isn’t a way to make life neat because of sin. Every time I think I have every problem solved, every task organized, and every person content, a new set of difficulties emerge, sometimes more complicated than the first. And, of course, there are the problems that are simply out of our control.

I have a friend who is ill, very ill. It is an illness that was brought on suddenly and will likely have life-changing consequences for him and his family. Because of the instant interacting of people across long-distances through technology (like Facebook), I have been able to observe people’s reactions to his illness. One couple in particular have been interesting to observe. This couple (friends, not family) almost immediately set themselves up at experts on everything! They have done their best to control the doctors, the choice of hospital, how other friends respond… everyone! At first it was irritating until I realized that this was how they were trying to deal with their anger and grief. In an obviously uncontrollable situation, they are trying to bring about some order and control by trying to tell everyone what to do, what to say, and how to act. So while they are trying to present themselves as people who are hearing from God, the ones who are actually hearing from God may be the friends who are the most silent, spending their time in prayer.

I am the Lord, and there is no other Savior. From eternity to eternity I am God. No one can oppose what I do. No one can reverse my actions.

I can truly relate to that couple because I’m like that: I’m a controller. Oh, I’ve tried to tone down my interactions with others (I used to be so much worse), but I know that when I get stressed, when loss looms on the horizon, I want to control everyone and everything around me. The truth is, who I’m trying to control is God. I simply want my way and not His! Foolish woman that I am. I have to laugh. There is no other Savior, including me! How in the world do I think that I can control… anything? I suppose I control my own behavior and reactions, but that’s about the extent of it. Everything else is in His hands, including me. And any control — any self-discipline — that I have at all comes directly from and through His Holy Spirit.

So it comes down to this: Do I believe that God loves me and wants the best for me? Romans 8:28-30 (one of my favorite passages) tells me just that: And we know that God causes everything to work together for the good of those who love God and are called according to His purpose for them. For God knew His people in advance, and He chose them to become like his Son, so that His Son would be the firstborn, with many brothers and sisters. And having chosen them, He called them to come to Him. And He gave them right standing with Himself, and He promised them His glory. (NLT) This is similar to a phrase in the Isaiah passage: You have been chosen to know me, believe in me, and understand that I alone am God. God chose me. He chose me. We are God’s very own children, adopted into His family — calling Him “Father, dear Father.” For His Holy Spirit speaks to us deep in our hearts and tells us that we are God’s children.” Romans 8:15b-16 NLT Knowing this, how can I doubt that God loves me or that He is providing the very best for me?

When I try to control, I may in fact be messing things up in such a way that His best will be hindered. Certainly I’m not my own savior; I can’t save anyone, including myself! And the sooner I learn to let go and let God, the sooner I can rest in Him, knowing that He is working all things for my good!