See, I am doing a new thing! Now it springs up; do you not perceive it?
I am making a way in the desert and streams in the wasteland. Isaiah 43:19

My friend was sharing about a million things that seemed to be going wrong all at once. A couple of big issues and a bunch of smaller ones piled on her shoulders until she felt buried. She knew intellectually that it would eventually pass, that things weren’t as awful as they seemed, but knowing couldn’t halt the emotional, gut-churning fear and resentment.

Ever been there? (Yes, I see all those nodding heads.)

I wanted to say the right words, offer some small bit of comfort or assurance. Nothing came, so I did the wisest thing I could think of—I just shut up and listened. Amazing how often saying nothing is exactly the right thing to say. 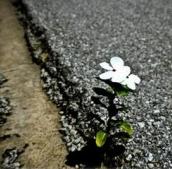 My friend reminded me of this flower. In her world, the soil was depleted and packed down until nothing could possibly grow. A thick layer of toxic pavement blotted out the sun and created a hostile, lifeless environment that obscured any hint of beauty, possibility, and opportunity. But, in this place where life seems impossible, a beautiful flower flourishes.

Like the flower, my friend can’t see the miracle she represents. She perceives a wasteland of struggle and fear and uncertainty, an avalanche of circumstances determined to divert her attention from God’s promise of new life. And yet, despite every attempt to obliterate hope, she grows and blooms in the midst of bleakness.

I think the world does its best to obscure beauty and create the illusion of hopelessness. Disappointment haunts every path at some point. Grief and fear wait patiently for a moment of weakness. A broken creation offers ample reason to despair and lose sight of dreams.

Maybe it’s our own mistakes or unfortunate choices. Perhaps it’s another’s intentional evil action. Or it might be an accident, the intended consequence of some seemingly innocent event. Doesn’t really matter—there’s no shortage of reasons to wonder if there’s really any point or purpose, if it’s all just idle futility. That’s the message of doubt our enemy desperately wishes to plant.

But God has a different story. Where we see desolation and impossibility, He offers the reality of hope. Where we see a barren desert, He makes “streams in the wasteland.” [Isaiah 43:19] Where we see a broken world, He sends His Son with a promise of new life.

I’ve been to that place called “hopeless” where a new beginning seemed impossible. I’ve felt so lost that I believed not even God could find me. I’ve wandered in complete darkness, convinced that no light could ever penetrate and help me find my way.

My world was a toxic dump, paved, barren, and hopeless. But God simply wouldn’t give up on me. Where nothing should have lived, He provided the miracle of a fresh start.

That’s always been His plan—for my friend, for me, and for you.

Jesus looked at them and said, “With man this is impossible, but with God all things are possible.” [Matthew 19:26]

Are you feeling like you’ve in a hopeless wasteland? Look around—where’s the flower that represents God’s promise of a new beginning?