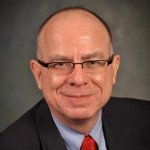 Michael Liimatta serves on the Advisory Board of Christians in Recovery and has spent over thirty years in urban outreach to the homeless and addicted. He has served as an educator and college administrator, a nonprofit executive director, consultant and addiction counselor. Michael is founder and Chief Academic Officer of City Vision College, as well as board president of two Kansas City area nonprofit organizations which he helped to establish; Footprints, Inc. and Connecting for Good. For seventeen years, Michael served as Director of Education for the Association of Gospel Rescue Missions. Previously, he spent ten years as founding director of New Creation Center, a licensed residential addiction treatment facility for indigent men with an outpatient counseling program for the chemically dependent and their family members.

Michael has an MA in Organizational Administration from MidAmerica Nazarene University and a BTh from the Inter-Lutheran Theological Seminary. He is an ordained minister with the Assemblies of God.