When Jesus returned to Capernaum several days later, the news spread quickly that he was back home. Soon the house where he was staying was so packed with visitors that there was no more room, even outside the door. While he was preaching God’s word to them, four men arrived carrying a paralyzed man on a mat. They couldn’t bring him to Jesus because of the crowd, so they dug a hole through the roof above his head. Then they lowered the man on his mat, right down in front of Jesus. Seeing their faith, Jesus said to the paralyzed man, “My child, your sins are forgiven.” [Mark 2:1-5] 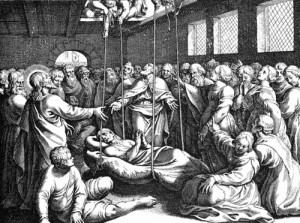 Do you believe God heals?

Sometimes it seems that we relegate healing to biblical times, as though miracles don’t still happen. I don’t believe that’s true.

Two weeks ago our church did a “service of healing.” The pastor talked about the importance of acknowledging the reality of pain, disease, and other worldly adversities faced by many among us. He stressed God’s power to heal and the mystery of why it doesn’t always happen. There was an opportunity for people to request prayers for specific healing.

Even though I didn’t respond, a man came and stood quietly beside me. He gently placed a hand on my shoulder—I’m sure he prayed silently for my injury to be healed. After a few moments he leaned down and whispered, “I believe God can heal your injury.”

I’m grateful for his prayer and for his concern. I also believe God can heal my injury.

Last week, our pastor referred to that service and once again discussed the mystery of healing. I’m sure it’s just my imagination, but it felt like he looked at me when he said, “Some of our hurts weren’t healed last week.”

I wondered about the guy who placed his hand on my shoulder. Did he believe his prayer hadn’t been answered, that God for some reason chose not to heal me?

Immediately following my accident I spent a lot of time begging for that healing, wondering why it didn’t happen, and listening to some pretty diverse (and bizarre) explanations for my failure to be healed. After a lot of thought and introspection, I reached this conclusion:

God has in fact healed me. In every way that matters, I’m whole and free.

In Mark 2, some men bring their paralyzed friend to Jesus. Their path is blocked by the crowd, so they take some rather drastic steps to get Jesus’ attention. Seeing their extraordinary faith and effort, Jesus looks at the paralyzed man and says, “My child, your sins are forgiven.”

Can’t you imagine their response? Scripture doesn’t record their thoughts, but I’m sure they wanted to say, “Excuse me, but we didn’t carry our friend all this way, fight through the crowd, and cut a hole in the roof to get his sins forgiven. We want him healed.”

Jesus knew why they were there. He knew they wanted their friend to walk. But He also knew that wasn’t what really mattered. Jesus gave the man something far more precious than a healed body—He gave, for free, a healed soul.

We read the rest of the story, how Jesus went on to provide physical healing, and we celebrate a miracle. Then we wonder why Jesus doesn’t reward our faith, why He lets us struggle and suffer.

We’re quick to condemn the religious leaders who watched Jesus that night, but at least they really understood what was happening. Physical healing wasn’t what impressed and outraged them—they’d seen that before. They knew that the real miracle, the one that mattered, was the forgiveness of sins. Only God can do that.

I don’t intend to discount the reality of worldly pain and struggle. God cares about our needs and concerns, and we should pray for His miraculous healing power. I do.

But we spend far too much time trying to explain why He chooses to heal some times and not others, why He sometimes answers, “No.” It’s not that those aren’t important issues; they are not the central issue.

Every single person who follows Jesus is healed. Every believer will spend eternity in fellowship with God. That’s the central issue—that’s what matters.

I don’t know why God chooses to leave me in a wheelchair. But I sure hope the man who prayed for my healing knows that his prayers were answered. God did not say, “No.”

My essence, and yours, is spirit. Spiritually, because of Jesus’ sacrificial love, we’re whole and healthy and free.

Do you ever get caught up in worldly concerns and lose sight of the eternal blessing of unmerited forgiveness?