Here’s an Alcoholics Anonymous-Bible refresher as Early A.A. spoke about using the Bible 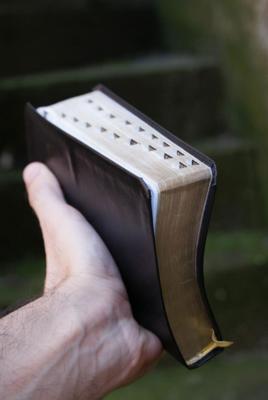 “When we started in on Bill D. [A.A. Number Three], we had no Twelve Steps, either; we had no Traditions. But we were convinced that the answer to our problems was in the Good Book. To some of us older ones, the parts we found absolutely essential were the Sermon on the Mount, the thirteenth chapter of First Corinthians, and the Book of James,” p. 13.

“I didn’t write the Twelve Steps. I had nothing to do with the writing of them. . . . We already had the basic ideas, though not in terse and tangible form. We got them, as I said, as a result of our study of the Good Book,” p. 14.

In DR. BOB and the Good Oldtimers

: A Biography with recollections of early A.A. in the Midwest (NY: Alcoholics Anonymous World Services, Inc., 1980) [This is A.A. General Service Conference-approved literature], the following is reported:

“The Bible was stressed as reading material, of course,” p. 151

“This was the beginning of A.A.’s ‘flying-blind period.’ They had the Bible, and they had the precepts of the Oxford Group, They also had their own instincts,” p. 96.

“Each morning, there was a devotion. . . After a long silence, in which they awaited inspiration and guidance, Anne would read from the Bible. ‘James was our favorite. . . Reading from her chair in the corner, she would softly conclude, “Faith without works is dead.” This was a favorite quotation of Anne’s, much as the Book of James was a favorite with early A.A.’s—so much so that ‘The James Club’ was favored by some as a name for the Fellowship,” p. 71.

“As the Akron group began gathering at the King School, a definite style evolved. . . . When the time came, the speaker would go up front, wait for quiet, introduced himself. He opened with a prayer of his own choosing, then gave a five-minute ‘lead.’ Usually, it would be on a specific subject—a passage from The Upper Room or a verse from the Bible,” p. 221.

“Dr. Bob was the first group leader I heard refer simply and without ostentation to God. He cited the Sermon on the Mount [Matthew Chapters 5, 6, and 7] as containing the underlying spiritual philosophy of A.A.,” p. 228.

“He [the alcoholic] must have devotions every morning —a ‘quiet time’ of prayer and some reading from the Bible and other religious literature,” p. 131.

For complete discussions of Alcoholics Anonymous, the Bible, and the Early A.A. meetings, see: