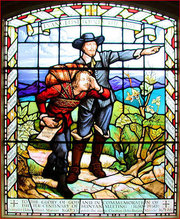 But we made a choice to go our own way, and so we had to leave. As beautiful and as perfect as it was, we stubbornly and rebelliously–although ignorantly and regrettably–packed our bags and chose to leave, to run away, to do our own thing, go our own way, run our own lives — to be the masters of our own fate. And now, like the foolish six-year-old who leaves home with nothing more than a baseball glove and a peanut butter and jelly sandwich, we find ourselves adrift in the dark night, the cold wind whistling down our necks as we shiver, wondering if we will discover who we are and where we came from–before it’s too late.

Of course, like the prodigal son, we can turn around and go back to the Father, but not to the Garden. When we left the Garden, the Father stationed angels to guard the entrance. No one who left could come back in, despite the fact that millions have tried, using any means at their disposal: drugs, alcohol, sex, money, power, education, success, religion, other people.

And the world continues to try to find the way back, longing for the Garden but rejecting the Father. As a result, they are doomed to fail…and to continue to wander aimlessly, still lost in the universal identity crisis that is common to all mankind.

No, we can’t go back to the Garden; we can only return to the Father. And, according to Jesus in John 14:6, there is only one way to get to the Father: “I am the way, the truth, and the life. No one comes to the Father except through Me.” For those of us who have found that One Way, may we recommit ourselves to lighting the Way for the lost who are even now stumbling down the road that leads to nowhere…

***Adapted from “Beyond Me. Living a You-first Life in a Me-first World” by Kathi Macias.