Ask Angie: I have spent the past two years fighting and praying for my marriage. I can’t remember two straight weeks when he has been nice to me. I am disappointed; he’s disappointed and after four different counselors, we are still at odds with one another. Our marriage has improved but it’s not even close to normal. My husband never kisses me, can’t say anything nice about me, and he has an ANGER problem. I told my husband he was controlling because he used to lock one of our bathroom doors and openly brag to his family that I was not allowed into “his” bathroom. I told him that we are married and not one has the right to tell the other that he or she isn’t allowed on his or her joint property. His answer was you have two other bathrooms to choose from and that I am crazy to think he’s controlling he just wanted something of his own. He chose which side of the garage my car can be parked on, when I can have family over, what I can cook until I said no way. Now all we do is sleep in separate rooms and have sex when he wakes me up in the middle of the night but kissing is not allowed. 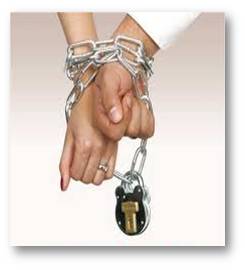 The first thing that needs to be done is to print out this marriage column and read it with your husband. Communicate your feelings to each other and come up with amicable ways to get along and be happy with one another. Marriage cannot be restored unless both husband and wife are willing to make the needed changes and sacrifices that marriage so much needs. Click all of the articles in this marriage column because that is where I feel you need the most support, which will steer you in the right direction to having a great marriage.

Marriage Guidance: After reading your letter I can see that you are focusing too much on your husband and his behavior rather than on what you can do for yourself. The negative focus you are putting upon your husband to be a certain way for you “is controlling”. Do you see how your attitude and behavior could be controlling as well?

But this is not the way God designed marriage to be.

The biblical principle we should be following is in how we treat one another.

If you don’t want to feel controlled than do not behave controlling.

Many marriages are like this. The wife puts all her energy and time into what her husband is doing or not doing causing him to feel micromanaged by his wife. Every little thing he says or does, she is right there ready to pick on him about it. By the way, husbands do this too; it is not only something that wives do.

Now… I’m not saying the husband in the above letter is not behaving controlling, but why feed into his control and only make it worse on yourself? Do something about it for yourself rather than becoming emotionally distraught, upset, and resentful? Learn to like where you car is parked and detach emotionally. You are allowing negative emotions to control “how you behave” towards your husband. This becomes a vicious cycle.

All the issues that you think your husband is controlling you with are things that you should be considerate about anyway. This is the way marriage works. Couples absolutely NEED to make sacrifices for each other because if they don’t it will definitely make for a very unhappy marriage, that’s for sure. Husbands and wives both need to make sacrifices for each other. By putting petty differences aside we can see more clearly to forgive.

The biblical principles we should be following here is in acceptance and sacrifice.

Bear with each other and forgive whatever grievances you may have against one another. Forgive as the Lord forgave you. Colossians 3:13<

Wives need to learn to be lovingly assertive with their husbands. What will this do? She will be letting her wants and needs known so she won’t have to hold in grudges and resentment anymore. When a wife holds in her feelings / resentment it comes out in her behavior and that behavior will be negative.

From what you have told me in the above letter I can see that you both are treating each other with disrespect and that is no way to get along in marriage—it will kill it! Ironically when we assert ourselves we get issues off our chest and don’t hold in resentments against the person we married.

Let’s take a look at the four issues that you think your husband is controlling you with.

He Tells You What To Cook For Dinner: A considerate wife would cook the foods her husband likes. If she has certain foods she likes then she should assertively speak up about it and ask for a compromise to cook the food she likes once or twice a week. If she is cooking for her husband on the other nights then why on earth would he have a problem that she cook something she likes once in awhile. This is not a marriage issue it is more of a complaint.

Better a dry crust with peace and quiet than a house full of feasting, with strife. Proverbs 17:1

He Chose Which Side of the Garage You Can Park Your Car On: Is this an issue or a complaint? Does it bother you more that he TOLD you where you can park your car or that you really don’t like where you car is parked?

The truth is, before we base marriage issues on a controlling husband or wife, we first need to find out if maybe we are behaving controlling too, and if we’re angry about it because we are resentful towards our husband about something else entirely different. I don’t believe that whether your car is parked on the right or left is an issue to become resentful over.

Compromise is the “key” here. Both of you need to stop being selfish and “give in” “submit” “humble oneself” and “respect” each other. These petty quarrels are slowly killing the marriage.

Live in harmony with one another; be sympathetic, love as brethren, be compassionate and humble… 1 Peter 3:8

He Locks The Bathroom Door: Well, like he said, you have two other bathrooms. Choose which one will be yours and lock the door behind you. I’m not sure I know what the issue here is again. Are you bothered because you do not know what he does behind the locked door, or are you bothered because you feel left out? Maybe he doesn’t want to subject his wife to any bathroom odors. I bet you didn’t think of that?

Instead of letting this small part of your marriage bother you, do something about it. If you really feel the need to share a bathroom with your husband then by all means invite him into your bathroom when the mood strikes you. If you feel offended or insulted over this behavior it is okay to lovingly let him know, but don’t fight and argue over such a trifle thing as a locked bathroom door. Focus on what really NEEDS your attention in the marriage.

He Tells You When You Can Have Family Over: How is this controlling? A wife shouldn’t invite family over and not discuss it first with her husband. Is that being considerate do you think? You see this is something in marriage that couples do all the time…they act as if the marriage is all about them! But marriage is never just about one spouse, ever! Why would a spouse do things without consulting with the other first? Selfish people are like this—they don’t understand how marriage is about BOTH of them.

Be completely humble and gentile; be patient bearing with one another in love. Make every effort to keep the unity of the Spirit through the bond of peace.

If a husband tells his wife to do this and to do that and never explains himself then it would get frustrating. Women need detail and need to know why about a husbands actions and speech. This is why a wife watches her husband like a hawk… he doesn’t talk to her!! Speak up! Both husband and wife need to learn productive communication skills and practice them daily in the marriage.

Remember that good communication skills mean being a good listener too!

You say that you are both disappointed with each other, it is because you are looking to each other with too high of expectations. Your husband expects you to make him happy and you expect your husband to make you happy. But right now neither one of you has anything to give to each other, so it fruitless to even try. You both need inner healing (study and put into practice the articles) to get over the neediness you think you deserve from each other.

Try this exercise with each other and see if it won’t give you a better attitude towards one another. Encourage each other by being considerate of one another. Stop focusing so much on what your spouse is doing…let them be! Get rid of all bitterness, anger, and resentment! I think this exercise will get you back in the groove of getting rid of the negative feelings and disappointments you may have with each other.

For by the grace given me I say to every one of you: Do not think of yourself more highly than you ought, but rather think of yourself with sober judgment, in accordance with the measure of faith God has given you. Romans 12:3