Every substance abuse counselor has probably at one time or another pointed to the “skid row bum” and said, “You don’t have to be like him to be an addict or alcoholic! ” While this type of person may represent only 5% of all addicts, Christians who are in recovery have a lot more in common with him than they may think! 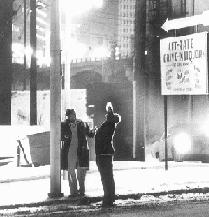 A drive through the streets of any major city reminds us that the “skid row bum” has not disappeared. Alarmingly, he has been joined by hundreds of thousands of people now called “the homeless. ” Who are they? 18-35 year old men, women who are 16-30 years of age, and single parents with children now represent the bulk of the homeless population. Most are minorities and local people, not transients, who have been homeless for one year or less. On today’s “skid row” we find people who are dependent on a variety of drugs, emotionally dysfunctional, mentally ill, and medically at-risk, especially for HIV/AIDS. A high percentage of them have been sexually and physically abused.

Besides not having a home to call their own, most of the 500,000 to 3 million people identified as homeless have something else in common – addiction and mental illness. According to one study, up to two-thirds of homeless adults suffer from alcoholism and at least half suffer from drug disorders.1 In their book, A Nation In Denial, Alice Baum and Donald Burnes shatter many of the myths surrounding the root causes of homelessness, which have little to do with the economy, governmental social policies, lack of affordable housing, and so forth. According to their research at least 65-85% of all homeless adults suffer from chronic alcoholism, drug addiction, mental illness, or some combination of the three, often complicated by serious medical problems. At least 1/3 of the homeless suffer from severe and persistent chronic psychiatric disorders. Forty to fifty percent of these individuals are “dually diagnosed” – suffering from addiction to alcohol and/or drugs, as well.2

Ultimately, the condition labeled “homelessness” is best described as a state of “disaffiliation” or complete alienation from meaningful human relationships and the social support systems most people have working for them. Most homeless people are either addicts themselves, or are the products of dysfunctional families and broken homes that were significantly impacted by addiction. These are root problems and, unless they are adequately addressed, any other help we provide will not be effective. While millions of dollars may be spent on education, housing, and employment for the homeless, these efforts do little to improve their lots if they are unable to stay sober by working through the very same recovery issues that many of us are dealing with in our own lives.

Sadly enough, while these problems are on the rise, the resources that are available are usually priced beyond what those who need help the most can afford! Between 1978 and 1984 there was a 17% decrease in treatment beds for the indigent (those without insurance or funds to pay for care). According to recent congressional figures, only 12. 5% of the nation’s 6.5 million drug users have access to publicly funded treatment.3

Is it possible that what we’ve called the “Christian Recovery Movement” could be helpful in solving this problem? Recovery in the Christian community is still largely a phenomenon of the middle class. Most Christian support groups meet in predominantly white suburban churches, usually outside of the reach of inner city people who could greatly benefit from them. Additionally, almost all of the Christian self-help literature is written with a cultural and educational bias aimed at this social strata. There are, however, some encouraging signs.

For many people, the stereotype of the “rescue mission” or “gospel mission” is that it is a place for middle-aged alcoholics gathered for a sermon, bowl of soup, and a semi-clean place to “crash” for the night. To the contrary, the types of people who now look to inner city missions for help have changed dramatically. They are younger men and women, and entire families, with deeper problems in their lives than ever before. Many rescue missions are responding by developing some very progressive and effective programs. Comprehensive recovery-oriented programs, using the Twelve Steps and other treatment strategies are now operating to help these homeless men and women lead healthy, stable lives.

Just how effective “Christian recovery” can be is powerfully illustrated in an SRI Gallup study of recovery from homelessness conducted for a rescue mission in Knoxville, TN. This study, conducted by a secular research organization, had no thought of “Christian recovery” principles factored into it. They identified six critical “life themes” that were strongly present in the lives of people who were able to recover from homelessness.>sup>4 Interestingly enough, these “life themes” clearly reverberate through the Twelve Steps. The following are listed according to their degree of importance:

Spirituality – as a source of personal strength and as the basis for rebuilding relationships with other people.
Self-Insight – by overcoming denial, acceptance leads to a new and accurate knowledge of oneself.
Security – feeling safe both physically and emotionally
Self-Awareness – being in touch with one’s own emotions
People Support – having others who care enough to be truly involved with one’s life (the total opposite of “disaffiliation”)
Suppression – being reconciled with one’s past and able reject negative thoughts, worries, and a poor self-concept

The movement to bring Christian recovery to the homeless is still very much in its infancy. Countless gratifying “12th Step” opportunities exist at inner city missions for Christians in recovery who are willing to transcend their cultural ” comfort zones.” Rescue missions throughout the nation are in desperate need of staff members and volunteers who understand recovery and can share it with others. If you would like to become involved, contact the AGRM for more information.

This article appeared in the Summer 1994 edition of STEPS magazine, journal of the National Association for Christian Recovery. © NACR, 1994, all rights reserved