When I was a senior in high school, I had a caricature drawing done with a friend of mine. I remember as we sat for the artist, we tried not to laugh and squirm as we anticipated what the finished product would look like. 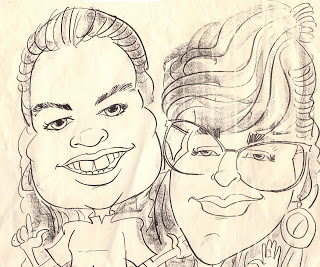 And, I’ll admit it, when I saw the drawing, I was startled.

I looked at my ginormous head, stubby nose and large mouth and it certainly didn’t look like a “beauty shot.”

But, it was never supposed to. The caricature was, well, a caricature.

“a picture, description, or imitation of a person or thing in which certain striking characteristics are exaggerated in order to create a comic or grotesque effect.”

I didn’t quite appreciate the drawing for what it was: exaggerated. The shock to my system created feelings that confirmed, yes, I was grotesque.

And that drawing memory connects me to another one.

My high school art teacher repeated a motto as we, her students, attempted to draw anything, people included:

“Draw what you see, not what you know.”

The concept, if embraced,

promotes a lack of judgment at reality. Whatever the artist’s subject is, it is neither good nor bad. It is a composite of shapes and lines.

If we stay true to recreating what those shapes and lines are, we have an accurate representation. If we don’t, we have a caricature.

I bring up this “caricature versus drawn – true-to-life” principle to show some of the origins of disordered image.

Left unchecked and uncorrected, this can blossom into full-blown anorexia, bulimia, binge eating or any other form of harmful body image, food or weight issues.

Caricatures, in this disorder context, are the distorted funhouse mirrors which tell us we are too ugly, too fat, too monstrous. And these caricatures operate largely from a place of envy.

A sound heart is the life of the flesh: but envy the rottenness of the bones. Proverbs 14:30

“A feeling of discontent and resentment aroused by and in conjunction with desire for the possessions or qualities of another. To feel resentful or painful desire for another’s advantages or possessions.”

Caricature, with its emphasis on exaggeration, not truth, if rooted in our hearts, can convince us we are “wrong.” We look wrong; we have the wrong size and shape.

The heart is deceitful above all things, and desperately wicked: who can know it? Jeremiah 17:9

And, if we keep applying caricature over truth, we will be led down a road rife with envy, misery and disorder.

For where jealousy and selfish ambition exist, there is disorder and every evil thing. James 3:16

We choose to draw that harmful exaggeration of ourselves: the ugly, the grotesque.

However, there is another choice we can make.

“Draw what you see, not what you know.”

When I was at the most severe state of anorexia, I was not capable of seeing my actual self for what it was. I was immersed in distortion. I saw things which were not there. I saw things as much bigger than they actually were.

And, as my disorder morphed over the years, I still was not accurately seeing myself for who I was.

All things were made by him; and without him was not anything made that was made. John 1:3

I would look in the mirror and only see my definition of the worst, the ugliest, the fattest, the most horrible.

But prove yourselves doers of the word, and not merely hearers who delude themselves. For if anyone is a hearer of the word and not a doer, he is like a man who looks at his natural face in a mirror; for once he has looked at himself and gone away, he has immediately forgotten what kind of person he was. But one who looks intently at the perfect law, the law of liberty, and abides by it, not having become a forgetful hearer but an effectual doer, this man will be blessed in what he does.James 1:22-25

I had actively chosen to reject myself.

And, as I stayed in that exaggerated disorder place, I could not accept affirming, empowering truth. I could not begin to heal.

However, when I reached a place of wanting truth instead of the lie, I was set free, in an ongoing way, one which continues to unfold.

It’s an imperfect process. It incorporates challenging the negative thought or message, comparing it with God’s Word: do the two match up?

Each of us needs to challenge what it is we see: caricature or truth.

We are drawing- and drawing from – one or the other.

Which one is it?