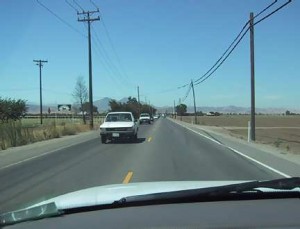 Oncoming Traffic – is most dangerous when you stare at it.

Be self-controlled and alert. Your enemy the devil prowls around like a roaring lion looking for someone to devour. [1 Peter 5:8]

How often to you consciously think about evil?

When I learned to drive I developed the dangerous habit of staring at approaching cars and discovered that you tend to steer toward your focal point. A number of animated reminders from my parents convinced me that it’s good to be aware of traffic but I needed to concentrate primarily on my own path.

By making them my focal point, I multiplied the threat posed by oncoming vehicles.

I don’t spend a lot of time thinking about spiritual warfare and the devil. I know it’s there. I absolutely believe we’re targets of a ruthless enemy who knows our weaknesses. He’ll do anything to destroy us.

But I also know about the psychological principle that whatever I focus on will become more powerful. Like an inexperienced driver, I gradually move toward my center of attention. The enemy knows this as well, and uses it to his advantage.

When I choose to dwell on the worst possible outcome in a given situation, I’m staring at oncoming traffic. I feed fear and anxiety. Apprehension diminishes my ability to respond effectively, making the situation worse. It’s a death spiral in which the enemy delights because it leads to despair and hopelessness.

That’s why a positive attitude is such a powerful ally. When I focus on opportunity and possibility I foster optimism and creativity. I’m more likely to discover and act toward a positive outcome. Confidence creates a different kind of spiral that leads to hope.

“The power of positive thinking” isn’t a magic bullet solution to every problem. That sort of simplistic approach seems dismissive to me. A good attitude will not instantly eliminate financial struggles, mend broken relationships, and heal significant illness or injury.

Like oncoming traffic, much of life is simply beyond my control. But regardless of external circumstances, I can always determine my attitude. And a big part of that involves choosing where I will focus my attention.

The enemy wants nothing so much as to keep me focused on anything other than Jesus. Everything he does seeks to direct my attention toward external circumstances. Whenever I look away from God, he wins.

“Your enemy the devil prowls around like a roaring lion …” [1 Peter 5:8]. The most important word in that passage: like.

The enemy isn’t really a roaring lion, he just acts like one. He makes a lot of scary noises, and since he operates in the shadows he can seem quite frightening. And he desperately wants my attention.

But it’s all noise. His only real power is what I give him.

I guess that why I consciously don’t put a lot of energy into dwelling on him. Obviously I must be vigilant. The Message says “Stay alert. The Devil is poised to pounce, and would like nothing better than to catch you napping.”

But “stay alert” isn’t a reminder to focus on the enemy’s scary roar. Instead, it calls us to attend to the open path ahead.

When I’m focused on Jesus, the enemy’s mighty roar becomes an insignificant purr.

What oncoming traffic is taking your focus away from your true path?

People of accomplishment rarely sit back and let things happen to them. They go out and happen to things.