I once saw a black and white photograph of the ultra-thin model Twiggy eating what appeared to be a plate of batter- dipped fish and French fries. And it provoked something. It had to do with the trigger-rife connection involving her thin physique and disordered food/body image concerns. 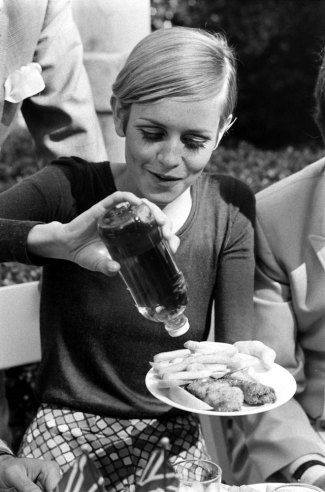 Twiggy (real name, Lesley Lawson) was world famous for her look, one which showcased a boyish, thin body, short hair and large eyes that were further accentuated by painted on eyelashes. Named “The Face of 1966” by The Daily Express, she took the 1960’s British Mod Scene and the fashion world by storm.

Yes, Twiggy was a game changer. And, because of her androgynous and thin appearance, she has long been criticized for promoting unhealthy body image messages.

Over the years, she has addressed those critiques when it comes to the topic of eating disorders and her own body:

“I was very skinny, but that was just my natural build. I always ate sensibly — being thin was in my genes.”

Reading that statement, therefore, brought up the concept of beauty variation.

In today’s culture, there’s been an obsession with the thin image. That’s no surprise. But, in more recent years, there’s been a growing movement to promote a variation of body shapes and sizes. Curvy, “plus size,” and “real woman” have been some of the buzz words used to describe and promote a healthier, more inclusive definition of beauty. And that’s wonderful, and, believe me, much needed, especially concerning impressionable youth.

But there is also another, less affirming and healthy message, one which is anti-thin.

I know, this is coming from me, the recovering anorexic and bulimic, who once weighed a low two-digit weight.

But there is a vast difference between the disorder sufferer who goes to great, self-destructive lengths to become emaciated and the individual whose body type is naturally thin.

When I was at the height of anorexia and at my lowest weight, I had to employ extreme, dangerous and obsessive actions to achieve that body. I starved myself and exercised for hours at a time. My thin frame required intense manipulation to make it so.

But there are individuals who naturally have thin frames. Years ago, when I came across the following statistic, the point centered on how emaciated models rarely occur naturally.

“The body type portrayed in advertising as the ideal is possessed naturally by only 5% of the American females.”
~The Renfrew Center Foundation for Eating Disorders, “Eating Disorders: A Summary of Issues, Statistics, and Resources”

And, in general, that’s true. However, what is often overlooked is the actual presence of these naturally thin females. Yes, they are a rarity; nevertheless, there, indeed, are some individuals who are “naturally thin.”

I applaud body acceptance, embracing all sizes and shapes. I believe it’s wrong to confine beauty to only a thin image- and an unhealthy version of thin, at that.

It’s about challenging the image message. When in doubt, talk about the matter. Have the conversation. Ask the questions. If there is a possibility of disorder, address it. If something seems to be an unhealthy image, talk about why it’s unhealthy.

But never, repeat, never, crucify the person. She- or he- may or be suffering. Or she-or he- may be naturally thin.

Regardless, talk, seek to find the answers and help as needed.

Being thin is not the problem. Self-hating, extreme mindsets and tactics, taken to exalt and create a life-threatening image, however, are.
So, with that in mind, why not accept your form, as it is right now, without conditions, without requirements? Take a page from Scripture…

O my dove…let me see your form…for your form is lovely.
Song of Solomon 2:14