What’s your reaction to this image? Can you relate? Did you and your mother actually participate in this activity together, treating it as a bonding thing, a game, a competition or a means of “self-improvement?” 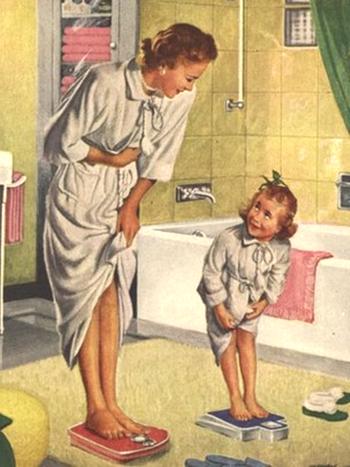 Mother’s Day. It is devoted to the remembrance and celebration of our mothers, those people who first loved us. And, perhaps, even, in the name of that love, diet and weight measurement were a part of that.

With my mom, I believe it was. She battled with her weight her entire life, certainly as long as I’ve known her. I discuss it in my book. Years later, I see how it wasn’t intentionally done to harm me.

But, nevertheless, that focus on body image, weight and thinness did. It’s not just my experience, not perhaps, not just yours, either. Studies have, indeed, shown its impact: I can relate.

“…The study, published this week in the Journal of Abnormal Psychology, found that when a teen-age girl develops an eating disorder ‘the mother-daughter relationship appears to contribute significantly.’

Kathleen M. Pike and Judith Rodin, who wrote the study, say they concluded this after comparing the test results of girls with eating disorders with those of girls who did not.

concerns about her daughter’s weight and appearance pose a significant risk that a daughter will be disordered in her eating,’ said the authors, who are researchers at Yale University… But their study said that daughters who have eating disorders are more likely to be those whose mothers have abnormal concern about weight control.

The researchers studied 41 teen-agers in the 9th through 12th grades who showed a drive for thinness, bulimia and dissatisfaction with their bodies, and compared them with 39 who did not show these characteristics. Bulimia is a psychological condition characterized by cycles of food binges, purging and then avoiding food. It may include bouts of anorexia nervosa, where a person has an abnormal fear of obesity and may refuse to eat.

In selecting as a control group the teen-agers who scored low on what the researchers called an eating disorder inventory, the researchers excluded the lowest 10 percent on the ground that dieting is so pervasive that this group was not typical.

Mothers and daughters in the groups were then given a series of questionnaires that asked about attitudes toward the family, dieting, weight loss and attractiveness. The study showed that ‘mothers of daughters with disordered eating had a longer dieting history and were more eating-disordered themselves.’

Eating disorders ‘may be learned at least partially through the daughter’s modeling the mother’s behavior,’ the study said.

For some, eating disorders may be an effort to manage anxiety, the study said, adding that ‘mothers are influential in terms of modeling this type of coping behavior for their daughters.’

The most marked difference between the two groups studied, the researchers said, involved the mothers’ attitudes toward the daughters’ weight and appearance. Mothers of girls with eating disorders may place ‘direct pressure on their daughters to be thin,’ the researchers said…

‘Mothers whose daughters were eating-disordered were more critical of their daughters than the mothers were of themselves,’ the study said. ‘These mothers did not think they needed to lose more weight than their peers; however, they thought that their daughters should lose.’

These same mothers also ‘rated their daughters as significantly less attractive than the daughters rated themselves.’

In the control group, the mothers’ ratings of their daughters’ attractiveness were much closer to ratings the daughters gave…”
“Study Says Mothers May Pass On Eating Disorders”

Growing up, Mom often used the term “right weight” as we were diet and food buddies, on again, off again. The standard was still the same: we needed to look a certain way- thinner- in order to be beautiful, a/k/a, worthy.

Honor thy father and thy mother: that thy days may be long upon the land which the LORD thy God giveth thee. Exodus 20:12

But, nowhere, did I learn to honor women, my mother and myself, included in that commandment. And that’s the saddest thing when I think about the mother-daughter connection. How many of those relationships were spent dieting, focusing on their weight, instead of their separate value as incredibly valuable females?

How many mothers and daughters focused on how God viewed us?

Since you were precious in my sight… I have loved you…”
Isaiah 43:4

This Mother’s Day, no matter what our experience has been, no matter if we’re a mother, a daughter and/or an eating disorder sufferer, we can choose to honor, to celebrate ourselves as women. Let’s allow God to meet us and help us, wherever we may reside in the spectrum of mother-daughter issues. Let’s not make our lives about conditional, oppressive standards. Let’s not teach these standards to the next generation. Let’s
not continue practicing those standards ourselves.

It is Mother’s Day, not measuring day. Value yourself, via this scripture, today:’

For I am persuaded that neither death nor life, nor angels nor principalities nor powers, nor things present nor things to come, nor height nor depth nor any other created thing, shall be able to separate us from the love of God which is in Christ Jesus our Lord. Romans 8:38-39