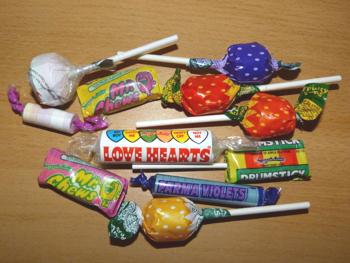 My mother’s preoccupation with the sugar has existed for decades. Yet, recently, I have experienced more of her junkie ways. In 2009, my mother had a stroke. And while hospitalized, her Type II Diabetic diagnosis was made. Now, she resides in a care facility and spends most of her time in her wheelchair. She is on medications to keep her blood pressure, blood sugar and assorted health issues stabilized.

There is a scene in the 1983 film, “Scarface.” In it, Tony Montana, a scrappy drug lord, has risen to power and has gigantic mounds of cocaine on his desk. His entire face dives into one of the mounds and he snorts away. When he finally lifts his head, telltale white powder covers his nose and mouth.

If Mom had her choice concerning sugar, there would, likewise be, similar piles at her disposal.
She joneses for her sugar fix. Brown bananas, crackers and packets of peanut butter and jelly accumulate on her nightstand and in her dresser drawers.

My mother ordered from a candy catalogue for years- and that continued into her care facility residence. Therefore, candy orders showed up in her room and in her high blood sugar numbers. So, I called the catalog company, informed them of her situation and cancelled her subscription. I thought the issue was handled. But catalogs continued to appear in her room. These catalogs, however, were different. The addressee was my late father’s name. Apparently my dad liked receiving candy from beyond the grave. So, I proceeded with cancellation attempt number two. I asked the company to flag two addressee names. The customer service rep was surprised by my Mom’s tactics. I was not.

She, again, wanted her sugar fix.

Deprivation is not healthy, even for my Diabetic mother. So, yes, Mom has special treats. We eat lunch with her once a month and buy a birthday cake for her party. And, since her birthday is close to Easter, we also bring her the Cadbury Crème Eggs she yearns for. Two years ago, we gave her an egg while prepping for her party. Seconds later, I hear a crinkling noise. The egg was gone.

The sweet tooth does not have an age limit or outgrow its need for pleasure. And, once someone is elderly, having more restrictions on his/her life, cravings can become even more all-consuming.

We may not view our aging loved ones as addicts, but, when it comes to sugar, sometimes, that is precisely who they are.