Do you consider yourself an optimist? Why (or why not)?

I’m doing a talk this week for an Optimist Club, so I’m thinking about optimism. I did a little research to find out what optimism is, where it originates, why some folks have it and some don’t.

Frankly, for much of my life I was a confirmed pessimist. I not only saw the glass as half-empty, but I was certain it was leaking and eventually would be completely dry.

I was the second person in this exchange.

Optimist:”This is the best of all possible worlds.”

Pessimist: “If that’s the case, then things can never get any better.”

I thought optimists chose to look through a lens that denied obvious evil, pain, and tragedy. I figured they were intentionally blind “Pollyannas” who ignored objective reality.

My definition of optimism was: choosing to see only the positive while being intentionally oblivious to the negative.

Christianity (or what I knew of it) only made it worse. I saw two kinds of Christians.

The first group was filled with doom and gloom. The world was horrible, and everyone who didn’t follow their rules was doomed to burn in the fires of hell.

The other Christians walked around with phony smiles pasted on their faces. I figured they were faking happiness, and secretly I almost hoped for some tragedy that would force them to acknowledge that things just weren’t all roses and sunshine.

It’s sort of curious that my injury in a senseless accident began a chain of events that eventually helped me understand the true nature of optimism.

I’ve told this story before, but it’s been a while. It marks one of the significant turning points in my recovery. 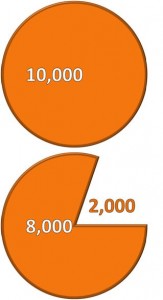 Leonard was tired of my endless complaining. More than a year after my accident I still invested more energy in seeking sympathy than working to get better. He was sick of my lousy attitude.

Leonard was the latest in a series of physical therapists who tried to help me adjust to life with paralysis. We had an unspoken agreement: they worked hard while I complained and made excuses for not working at all. Leonard tolerated this unproductive waste of his time for a few weeks, but as he got to know me his patience diminished.

Readers of Relentless Grace will recognize Leonard’s role in a particularly humorous and pivotal episode. However, his gruff wisdom impacted the unlikely outcome in many ways. One bit of insight altered my entire perspective on my injury.

One day as I complained about the physical tasks I couldn’t accomplish with my damaged body, he stopped and sat down in front of me with a blank sheet of paper. On one side he drew a circle around “10,000.” He said, “I want you to imagine that this circle represents all of the things you could do before your accident.”

Then he turned the paper over and drew a similar circle with a pie-shaped wedge removed. “You just lost a lot of things, and you may never get many of them back. But now you need to make a decision.

“You can spend the rest of your life griping about the two thousand things you lost, or you can focus on the eight thousand that remain.”

Leonard’s 8000/2000 principle became the working example of what I call REALISTIC OPTIMISM.

Realistic optimism isn’t about naïve denial of challenges. It’s about choosing to see the opportunity within a challenging situation. Understanding and grieving the loss of the 2000 is necessary and important, but we move forward only when we turn our attention to the promise and possibility of the 8000.

An optimist looks at moldy bread and sees penicillin.

Research apparently verifies my experience. It appears that optimism/pessimism is primarily a learned trait. I’m glad.

I still struggle with a physical pre-disposition to depression. Medication helps, but I have to be constantly aware of my tendency to perceive a leaky glass.

But I’ve learned that I can practice optimism and get better at it. And I’ve learned the life is a whole lot more productive when I focus on 8000 rather than 2000.

Later this week I hope to share a couple of ideas I learned in preparing for my presentation. But for now I’ll leave you with a couple of questions.

Do you think Christians tend to display false optimism?