After these things God tested Abraham, and said to him, “Abraham!” And he said, “Here am I.” He said, “Take your son, your only son Isaac, whom you love, and go to the land of Moriah, and offer him there as a burnt offering upon one of the mountains of which I shall tell you.” So Abraham rose early in the morning, saddled his ass, and took two of his young men with him, and his son Isaac; and he cut the wood for the burnt offering, and arose and went to the place of which God had told him. On the third day Abraham lifted up his eyes and saw the place afar off. Genesis 22:1-4 NRSV

Have you ever said “no” to God? 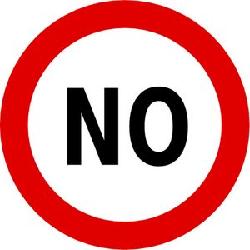 As many of you know, my husband and I are in the process of moving into a beautiful house given to us by the Lord. Moving in and unpacking a container we packed up two years ago, discovering things we’d forgotten that we had. It’s like meeting old friends again, finding the things we’d lived with for a long time and then suddenly didn’t have for two years. In many ways, a warm reunion, finding a place to put each thing.

In the process of unpacking I found a series of books that I’d had…and missed. I’m an avid science fiction fan and this series of books has been very enjoyable for me to read. I keep my books and read them over and over; the characters are, in a real sense, old friends with whom I become reacquainted each time I pick up a book. Yesterday, the Lord told me to clean out this particular series, to get rid of it. While there is no obvious sin within the books, there are moral threads that don’t exactly line up with scripture. Still, the main story line is moral (the good guys win) with strong characters.

The Lord said get rid of the books.

Can you believe I have fought with the Lord for an entire day? That I would either think I could convince Him to change His mind, that I could convince myself that I hadn’t heard from Him, or that I would have the temerity to say “no” to God? Finally this morning, I got up, surrendered (albeit still a bit rebelliously) and put the books in the thrift store stack in the garage. (And, no, I won’t be bringing them back into the house.) Sometimes our “loves” get between us and God. It doesn’t mean that I was in any sense in danger of losing my salvation, but I was willing, at least for a time, to trade God’s next blessing for the comfort of what I knew.

It made me think of Abraham and the story of God demanding that Abraham sacrifice his son. The biblical account is very flat; it doesn’t give us the details of what Abraham was thinking, of how he had to have struggled during the night with what God asked of him, or how he continually prayed, pleaded, and begged God during the three day journey. But you have to know that he went through all of these things. Isaac was the child of his old age and the child of promise. How could God bring about what He had told Abraham without Isaac growing to maturity, marrying, and having children? You have to know that Abraham argued and bargained, demanded and pleaded during those hours prior to finally climbing the heights of Mt. Moriah. And yet, how much would Abraham have missed if he had refused to obey God?

I know that there are other things in my life — beside a set of paperback books — that stand between me and obeying God fully. If I want God’s best blessings, if I want to become the woman that He envisions me to be, I need to be willing to set it all aside in order to seek Him and Him alone.