The lazy person does not plow in season;
harvest comes, and there is nothing to be found. Proverbs 20:4 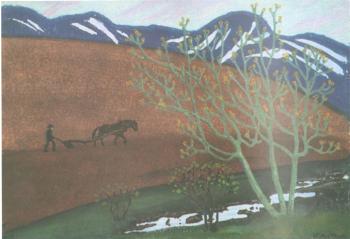 The Lord Jesus, when He walked this earth, took ideas from daily living and made them into ideas of eternal consequence. This proverb, which may have originally been about something as mundane as diligence in one’s work, becomes fraught with importance when placed against the teaching of the Master:

Then Jesus went about all the cities and villages, teaching in their synagogues, and proclaiming the good news of the kingdom, and curing every disease and every sickness. When he saw the crowds, he had compassion for them, because they were harassed and helpless, like sheep without a shepherd. Then he said to his disciples, “The harvest is plentiful, but the laborers are few; Therefore ask the Lord of the harvest to send out laborers into his harvest.” Matthew 9:35-38 NRSV

If, once we said the sinner’s prayer, everything was completed for us, there would be no need for the Heavenly Father to leave us here on this earth. But the fact is that we are working out our salvation and that “working” comes in the form of what we do for those around us in the form of ministry. A. W. Tozer wrote:

“Since the fall of man the earth has been a disaster area and everyone lives with a critical emergency. Nothing is normal. Everything is wrong and everyone is wrong until made right by the redeeming work of Christ and the effective operation of the Holy Spirit.

“While Christ was the perfect example of the healthy normal man, He yet did not live a normal life. He sacrificed many pure enjoyments to give Himself to the holy work of moral rescue. His conduct was determined not by what was legitimate or innocent, but by our human need” (That Incredible Christian, p. 104).

Think of that! The Lord Jesus’ “conduct was determined not by what was legitimate or innocent, but by our human need.” In other words, if we are to follow His example (which we are to do), then we shouldn’t be asking ourselves whether or not it’s okay to do something, but whether or not doing that “something” promotes the moral rescue of those around us.

When the Lord Jesus talked about the harvest, He wasn’t talking about literally going out into the farm fields and harvesting the crops. Rather, He looked around and saw the desperate moral situation of the people and stated, “The laborers are few!” And who are the laborers? Us! We are the laborers . . . if we are willing.

Tozer goes on to say:

If we want not to be counted among the lazy people who do not plow in season, then we likely need to reevaluate how much we give. Most of us give conditionally, reserving time, effort, and resources for ourselves. Better that we give all now then to be found lacking when we stand before the Throne.