“Fear not you; for I know that you seek Jesus which was crucified.” Matthew 28:5 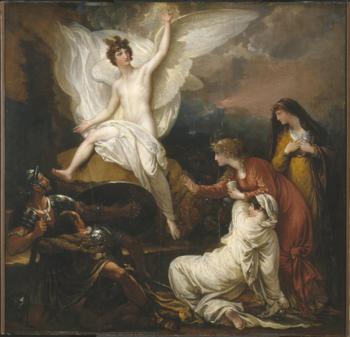 THIS was the address of an angel to Mary Magdalene, and the other Mary, that had come to see the sepulcher before break of day They were last at the Cross, and first at the tomb. Favors are given sovereignly by the Lord, but honor is conferred according to a rule; and the rule is this: “Them that honor me, I will honor.” These women were informed of his resurrection before the apostles; the apostles received the intelligence from them, but they received it from an angel.

At first these pious visitants were afraid. And what wonder when we consider that they were females; that all their sensibilities were alive; that they were in another’s garden; that they were alone; that the earth was reeling under them; that the guards were fleeing, and perhaps shrieking; that it was early in the morning, and the remaining darkness rendered more visible and awful the divine messenger sitting at the door of the tomb — his countenance as lightning, and his raiment white as snow!

But, says the angel, “You have nothing to fear from me. He is my master, as well as your Savior. I serve him whom you seek; and having attended his resurrection, I now announce it to you. He is not here; he is risen, as he said; step forward; come, see the place where the Lord lay.”

And it is true, in its most extended application, that they who seek Jesus Christ which was crucified, have really nothing to fear, whatever at first may dismay them. But who are entitled to this assurance? Do you feel your need of him as once you did not, for all the purposes of salvation? Have you desire after him so peculiar that nothing else can satisfy them; so powerful as to make you willing to part with whatever stands in competition with him? Are you determined to press through all difficulties, and be found in the use of all means which he has appointed? Are you submissively asking, Lord, what will you have me to do? depending on the aid of his Holy Spirit? and looking for his mercy to eternal life? If you can answer these questions in the affirmative, I know that you seek Jesus which was crucified.

— And, also know, that you have nothing to fear. “Fear not you.” Fear not that you have a graceless heart; the very seeking is a token for good. It cannot be the effect of nature; that which is of the flesh, is flesh; but that which is of the Spirit, is spirit. They that are after the flesh, do mind the things of the flesh; but they that are after the Spirit, the things of tile Spirit.

Fear not that your search will fail. Had he a mind to kill you he would not have shown you such things as these. His aim in making you sensitive to your condition, was not to render you miserable, but to endear himself; and to draw forth your souls after him. You shall not be disappointed. You may be tried, but he will appear to your joy. Did any ever seek him in vain? Can he deny himself? They that sow in tears shall reap in joy. Blessed are they that do hunger and thirst after righteousness, for they shall be filled. Fear not that you shall fall under the power of any evil.

From what are you not secured? Is it temporal want? The young lions may lack, and suffer hunger; but they that seek the Lord shall not want any good thing. Is It the penalty of the law? He has redeemed you from the curse of the law, having been made a curse for you. Is it sin? Sin shall not have dominion over you; for you are not under the law, but under grace. Is it the world? This is the victory that overcomes the world; even our faith. Is it Satan? The God of peace will bruise Satan under your feet shortly. Is it death? He has abolished death. O death, where is your sting? O grave, where is your victory? “Nay, in all these things we are more than conquerors, through him that loved us. For I am persuaded, that neither death, nor life, nor angels, nor principalities, nor powers, nor things present, nor things to come, nor height, nor depth, nor any other creature, shall be able to separate us from the love of God, which is in Christ Jesus our Lord.”