John 3:16-18 NRSV
For God so loved the world that He gave His only Son, so that everyone who believes in Him may not perish but may have eternal life. Indeed, God did not send the Son into the world to condemn the world, but in order that the world might be saved through Him. Those who believe in Him are not condemned; but those who do not believe are condemned already, because they have not believed in the name of the only Son of God. 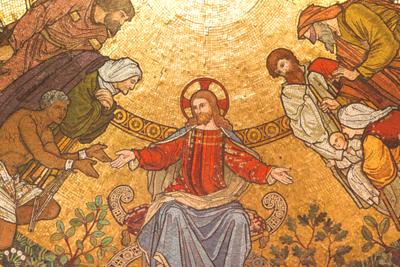 Today is Christmas, the day traditionally that Christians celebrate the birth of our Lord. Surrounding this tradition are such things as nativities, Christmas pageants, Christmas carols, family celebrations, gift giving, and the like. But as a Christian, I believe that it’s very important that I not so focus on the Child in the manger that I fail to see either the Savior on the cross or the King returning in the clouds.

The Christmas story is one of amazement and wonder. Music and stories sometimes reduce to the story to actually less than it is (and was):

Yes, the Lord Jesus had no crib when He was born. Yes, His mother laid Him as a baby in the hay trough used to feed the animals. But it is so much more than that. Father God–the Creator and Master of the universe–sent His Son, the very essence of Himself, to earth to exist within the frail form of a human for the purpose of bringing us salvation, a salvation that couldn’t be secured in any other manner. God Himself, both judge and savior, understanding that mankind was lost beyond hope because of our own sins, provided a Hope by becoming that which He had condemned, a human. He condemned us by necessity and His holy judgment. He saved us from that condemnation through His own sacrifice and His overwhelming love.

The Christmas story isn’t a story that exists in isolation. We cannot tell the Christmas story, even the story of the Child given to rule (Isaiah 9:6) and stop there. The story of Christmas is only the beginning. And, in fact, even the story of Easter is still yet only the beginning. The 33 years that Christ lived on the earth was the beginning… the beginning of a marvelous relationship that God, in His infinite love, wants to offer each and every person who has ever been born, who has ever lived on this earth. For God so loved the world, not part of the world, but the entire world, and gave His Son as the only possible sacrifice to reinstate a lost relationship, a relationship lost because of our sin.

The story of the life of the Lord Jesus–the life lived here on earth–is such a small part of the story. For God Himself will write the end to the story of this earth through a great judgment:

“Then I saw a great white throne and the one who sat on it; the earth and the heaven fled from his presence, and no place was found for them. And I saw the dead, great and small, standing before the throne, and books were opened. Also another book was opened, the book of life. And the dead were judged according to their works, as recorded in the books. And the sea gave up the dead that were in it, Death and Hades gave up the dead that were in them, and all were judged according to what they had done. Then Death and Hades were thrown into the lake of fire. This is the second death, the lake of fire; and anyone whose name was not found written in the book of life was thrown into the lake of fire.”
Revelation 20:11-15 NRSV

The One who sits on this throne is indeed the same One who came as a baby and lay in a manger. God as Father, Son, and Holy Spirit will sit in judgment over each person who has lived. This is the Christmas story, the guarantee to those who have had their names written in the Lamb’s book of life that there will be no more punishment for sin, but instead full forgiveness and salvation! There will be no more death, but life for those of us who have fully thrown ourselves upon His mercy and grace. And this isn’t an exclusive club or society where only some may enter. Anyone who wishes to come to the cross and accept this gift may come. All are invited:

The KJV uses the phrase “whosoever will.” That whosoever will is God’s Christmas gift to the world. Any and all may come and accept the water of life as a gift. If you haven’t done so, today that gift is being offered to you. Will you accept it?