A sound heart is the life of the flesh: but envy the rottenness of the bones. Proverbs 14:30

I love Sophia Loren; I love Jane Mansfield. So, when I saw a photograph of them together, the fan in me squealed. Perhaps you’re familiar with the image. It’s the two stars, seated together at a table at some Hollywood 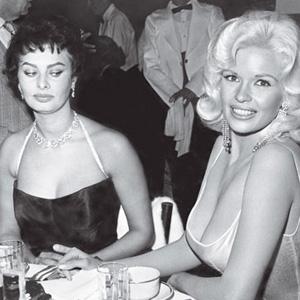 event. Sophia Loren’s eyes look off to the side, staring at Jayne Mansfield’s cleavage. Could this be, perhaps, an example of envy being photographed?

We know both women are popular culture and beauty icons; they’re sex symbols. Ms. Loren, to this day, is an embodiment of exotic beauty. How many of us have unsuccessfully tried to achieve that dramatic “Sophia look,” only to poke ourselves in the pupil with the liquid eye liner?

And, the late Ms. Mansfield’s ample bust, supposedly measuring anywhere from 40D to 46 D, is frequently mentioned and even compared to that of Marilyn Monroe’s figure. How many of us have stuffed our bras with tissue to look just like her? (Somehow, we never did).

Anyway, this photo reminded me of a pesky, less than flattering reality: envy of others. Hardly any one of us is immune from it. Adolescence certainly makes sure of that!

For we also once were foolish ourselves, disobedient, deceived, enslaved to various lusts and pleasures, spending our life in malice and envy, hateful, hating one another. Titus 3:3

And, although most of us aren’t celebrities, we can find ourselves in the same club as Sophia Loren, eyeing -comparing – ourselves against our self-defined “competition.” It becomes a race. Who is the fairest of them all?

We envy, eyeing something which belongs to another, wanting to possess it for ourselves. And it doesn’t always have to be about cleavage, either!

By now, you’ve probably seen the film, “The Silence of the Lambs.” If not, spoiler alert. In the movie, a serial killer has taken to murdering women and wearing their skins because he, himself, wanted to be a woman. Anyway, the FBI agent on the case reluctantly enlists the help of convicted prisoner and yes, folks, cannibal, Hannibal Lector. In a discussion with the FBI agent, the Lector character brings up the issue of coveting, stating, “we covet what we see.”

Now you and I probably wouldn’t consider ourselves to be serial killer evil, but are there things we covet in our lives? What-who- where are they? Is it an obsession with beauty and being thin? What about money? Fame? Power? Achievement? Career? Family? Do you want something you see which belongs to someone else?

What are you and I “eyeing?” Why aren’t we enough?

You and I are unique, valuable creations. But how can we see and experience that truth if we’re always looking at someone else’s hypothetical cleavage?

You’re not hopeless. But look at what you’re wanting. Are you coveting? Are you envious, even to the point of being bitter and hateful?

Remember you have worth already – as is!

…I am fearfully and wonderfully made… Psalm 139:14

You’re incredible, loved, worthwhile and enough as yourself. Don’t wish you away! Someone else’s stuff does not detract from who you are. You are the only one of you; God’s unique purpose is wrapped up in that Truth! Keep your eye on that instead!