Nature versus nurture: it’s still an unanswered question. And that mystery applies to all things appearance.

Faces have always captured my attention. I am fascinated by the variety of features and expressions they contain.

A Couple of Kittens…

I first was obsessed with my mother’s set of three cat figurines. There was one “mother cat” and her two smaller white kittens. I was especially preoccupied with the kittens. 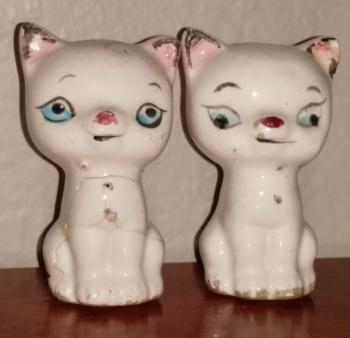 And here, perhaps, is where I encountered one of my first harmful disordered ideas about image. I viewed one kitten as cuter, a/k/a, “better” than the other. Why? It was because this kitten- let’s call her “Sally”- appeared to have a sweeter, more pleasing, “good kitty” facial expression. The other kitten, however, had more of a “Sophia- Loren- exotic- eyeliner-drawn- face” situation going on.

And, somehow, to me, that kitten face – let’s call her “Sophia”- symbolized more mischief and displeasing, “bad kitty” behaviors than that of innocent-and-cute-looking Sally.

Indeed, in this kitten context, my toddler self was already learning inaccurate appearance associations all on my own.

But soon, other influences contributed to my preferences. Adults also instructed me about which emotions, often depicted in the human face, were acceptable – and which were not.

Now, we’re entering into a murkier place I like to call, “The Land of the Spank Spoon.”

Yes, you heard me.

To keep unruly little me in line, Mom had created a device to instill, if not fear, than certainly obedience in her child. This was the wooden “Spank Spoon.”

Please keep in mind, I was never hit with it.

For, you see, my mother had created a far more effective strategy. With a black magic marker, she had drawn a scary, angry- and not, in any way “cute”- face on that spoon. It was enough to stop toddler me from engaging in any destructive activity.

Mom simply kept the angry- faced spoon in a kitchen drawer. And, when I became disagreeable and/or troublemaking, all my mother had to do was quietly open that drawer, root around for the utensil and, if I was especially horrid, bring it out and show me its “face.”

That was it. “Good girl” behavior was activated.

And so, from that, I further connected “cute” plus “well-behaved” equals desirable “good/right girl.” I needed to be her at all cost.

Not surprisingly, I received the message she needed to be avoided all the time…or else!

And the abusive template within my home did nothing to challenge those thoughts.

As with many of us who have survived dysfunctional homes, the priority each family member seems to learn is pretty lies over ugly truth, silence over speaking, diseased behavior over health and public (happy) appearance over private (painful) reality.

Emotions which weren’t the pretty, easy or pleasing were unsafe and unacceptable. NOW, tack on still more counterproductive lessons to a female child, and let’s see what else happens!

My disordered eating and image issues did not suddenly flare up overnight. They were built, to quote scripture,

line by line and precept by precept. Isaiah 28:10

And, a larger part of that building process was impacted by a system my mother and I frequented.

By the time I was in kindergarten, Mom introduced a rating system to me. My mother always tried to convey the message I was a beautiful little girl. And, arguably, there was nothing wrong with that, in and of itself.

But the problem, perhaps, was how my mother, as well-intentioned as she was, went about cementing that message: by comparing me against other females, while denigrating them. I remember many times, in grade school, Mom would pick a friend, a classmate, a teacher or a celebrity and decide on her ranking.

“Cute” was the basic level. Again, like Sally, the kitten figurine, Mom firmly believed in the power of “sweet-looking” to translate into “cute” territory. If a female looked like sugar and spice, and all things nice…

“Pretty” was the next level. It usually had to do with my mother’s approximation of a female’s “fine feature” status. Did the person in question, for instance, have “dainty” features or a “horse face?” Yes, Mom used those terms with regularity.

“Beautiful,” the ultimate, end-all, be-all in the ratings system was reserved for only the most extraordinary (and good) of the female species.
Of course Mom, like most mothers out there, designated her child to be in that “beautiful” category. She would compare my darker features against a paler, blonder female and “choose” me to be the winner in the beauty Olympics.

As an adult now, I squirm at the cruel focus paid to any human being. Pitting female against female, all in the name of fostering self-esteem? It doesn’t work and it’s not right.

For, even though we didn’t know it at the time, by virtue of the ratings system, Mom and I were also determining each person’s value as a human being. I liken it to criticizing The Most High, declaring, “You made a real piece of junk there.”

And, adding even more judgment to an already harsh situation, being thin was, of course, an important attribute in the appearance mix. The criteria of thin was assigned to the beautiful, “good girl” trait. The absence of thin, likewise, created the “bad and ugly girl,” and her displeasing form.

According to the sick sport ratings system Mom and I played, you could not be “cute,” “pretty” or “beautiful” if you were, in any way, “fat.”

“Fat” was a deal breaker.

A huge problem with that, as it related to Mom and I? We were both struggling with our weight. So where did that leave us?

“…If I could be thinner than these women, then I’d be better than they were as well… Mirror, mirror: I had to be the thinnest one of them all… anything less than that was unacceptable…”
(Excerpt from “Thin Enough: My Spiritual Journey Through the Living Death Of An Eating Disorder”)

No matter what I did, I felt I could not attain that coveted standard. I never felt “beautiful.” So, what was I? Answer: an ugly failure.

It seems to be an uphill battle, this appearance issue.

Again, nature or nurture comes up as we try to decipher why, exactly, human beings respond to aesthetics in a certain fashion.

Nature doesn’t necessarily make things easier. For, according to a British study, done by Alan Slater and his colleagues at the University of Exeter, this facial obsession is somehow hardwired in us, even in the youngest of human beings.

“….’Almost all the babies spent more time looking at the more attractive face than the less attractive one,’ says Slater…He suggests the reason for this preference is simple – pretty people actually have the prototype of a human face. Researchers have long noted that by melding together hundreds of faces, a statistical average of facial characteristics is reached that happens to be incredibly attractive…”
“Babies Prefer To Gaze Upon Beautiful Faces,” By Anna Gosline, www.newscientist.com

So, there’s already a pre-existing importance placed on appearance. First, the face. Next, could the body be far behind?
If we cannot escape matters of beauty, appearance and physical attractiveness, then, I guess we need to reframe their priority and place in our lives. This is so much easier said than done.

Train up a child in the way he should go: and when he is old, he will not depart from it. Proverbs 22:6

“…Elohim sees not as man sees: man looks on the outward appearance, but Elohim looks on the heart.” 1 Samuel 16:7

Therefore, we cannot underestimate the power and the necessity of applying “nurture” to the “nature” of human response concerning appearance issues. An argument can be made, then, that the “nurture” influence, heavily stemming from our Creator, must be instilled in human beings from the very start.

For, we cannot do anything to avoid aesthetic preferences. Each person will have them. We have our likes and dislikes.

But, we need to explore why they are that way for us.

Was it just organic baby fascination with a pretty face? Or was there another influence, with, perhaps, another harmful message attached?

If we, as human beings, are not directly “teaching faces,” then we certainly are, inevitably, “learning them” elsewhere.

And, what we learn contributes to either harm or health. We need to “face” that.