One day after visiting the grave of my brother, I began to stroll through the cemetery and found the grave of woman whom I had grown up with. Not only was she buried there but also her teenage son. As I stood there reflecting on what could of went wrong in their lives, I noticed as two car loads of young men parked and exited their vehicles. 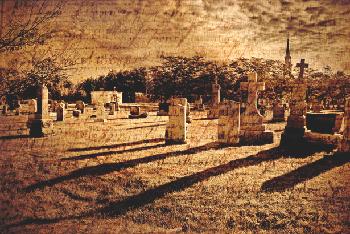 I waited for a few seconds as the men stood behind me and then I turned and ask them “Was this someone’s mother? One of the men stepped forward and said “No, her son was our friend.” My response was “I see.” Then I proceeded to share with them that I had grown up in the same Santa Ana, CA neighborhood as the mother and began to mention names of her family members.

This seemed to release a little tension in the air and then I asked them “Did they die in a car accident?” The spokesman of the group once again stepped up and said, “No, our friend was killed by the cops.”

“And the mother?” I questioned.

“She died two days later of a broken heart”, was his rely. Wow, those words were thick and powerful as they entered into my mind to be deciphered and to be quite frank. This revelation very much grieved my spirit to know that the once giggling little girl that I first met in grade school had died from a state of utter hopelessness. I thanked them for allowing me to hear their story, and I commended them for their loyalty to their fallen friend, and then made my exit.

Life for the most part is beautiful and exciting, but sometimes unexpected tragedies can bring us to our knees in despair. There are situations which can usher a person into an unphantomable realm, where misguided emotions lead its victims deeper into the storm driven waves of hopelessness. The great Psalmist of Israel King David writes of his own personal experiences in Psalms 55:4-7, “My heart is in anguish within me, and the terrors of death have fallen upon me. Fear and trembling come upon me, and horror has overwhelmed me. I SAID, “OH, THAT I HAD WINGS LIKE A DOVE! I WOULD FLY AWAY AND BE AT REST.”

FLY AWAY
King David, like most of mankind was tempted by the misconception, of thinking that running away from grief and pain is a cure all solution. This idea has proven itself, to be worthless, devastating, and only delays the healing process. History has given us many good examples of people who have endured painful experiences, with godly character, dignity and honor (read the Book of Job), but on the other hand, we also have witnessed that man’s antidote for relief has not changed over the ages — for the love of money, extra marital affairs and drugs/alcohol have ruled over the nations and it’s subjects have forsaken all to come under the influence it’s merciless spell. This vain attempt to somehow fly away and experience rest has proven itself futile, for after the temporary euphoric rush, we once again found ourselves facing reality square in the eye.

KEEP CONNECTED TO PEOPLE
One of the most valuable gifts that God has given us is community. When God created Adam in the Garden of Eden, he stated, “It is not good for man to be alone.” So he formed Eve from a rib taken from Adam (Genesis 32:18,-22). Scriptures tells us that “No temptation (adversity, affliction, trouble) has overtaken you such as is common to man (others have traveled through that storm, allow them to show you the way to get through it – * writer’s insert); and God is faithful (true, sure, to be trusted), who will not allow you to be tempted beyond what you are able, but with temptation will provide the way of escape also, so that you will be able (having the means or power to be or act) to endure (continue to exist) it (1 Cor. 10:13)

SERVING BRINGS HEALING
During one phase of my Christian service, as a Chaplain I had the privilege to be allowed to walk through the death process of many beautiful people. We prayed, read Holy Scripture, talked, laughed and did a great deal of listening. So many times it was they that ministered to me. God admonishes us to; “Bear one another’s burdens, and thereby fulfill the law of Christ.

Let us not lose heart in doing good, for in due time we will reap (*- a good harvest – writer’s insert -) if we do not grow weary (exhausted in strength, endurance, vigor, or freshness). So then, while we have opportunity (don’t miss it! – writer’s insert!), let us do good to all people, and especially to those who are of the household of faith (Gal. 6:2, 9-10).”

KEEP CONNECTED TO GOD
It’s been said that one of the greatest assets that King David possessed was his ability to fall forward. By this, I mean in all his tragic experiences such as the death of his infant son (2 Sam. 12 15-23), and the rebellion and death of another (2 Sam. 15 & 18). He always ran and fell into the arms of his merciful and loving God. Even when he suffered big time for his moral failures (2 Sam. 11:1- 27), he continued to hold onto the hand of God.

“How blessed is the man/woman whose strength is in You. In whose are the highways to Zion! Passing through the valley of Baca (WEEPING) they make it a spring; The early rain also covers it with blessings. They go from strength to strength; Every one of them appears before God in Zion (PS.84:5-7).”

COME AS YOU ARE
Life’s unexpected tragedies are truly painful and seemingly an unbearable experience. We are limited in our sincere attempt to console others, but there is One who is all powerful and full of compassion. Because of His unlimited love, He (God) became flesh (man) and dwelt among mankind (Jn 1:1-5, 14, Col 2:9), so that you and I could see the heart beat of Deity as Jesus wept at the grave of His beloved friend Lazarus, and the power of His Word as the King of Kings proclaims “I AM THE RESURRECTION AND THE LIFE (Jn. 11:25, 35). And for those who have lost their way in search of truth and purpose, HE says “I AM THE WAY, THE TRUTH AND THE LIFE, and no one comes to the Father by ME (Jn. 14; 6).”Though weary and broken, may we Like King David fall forward into the healing arms of the Great I AM and in His Holy presence be comforted by His beckoning call of ” Come unto Me, ALL who are weary and heavy-laden, and I will give you rest. Take My yoke upon you and learn from Me, for I AM gentle and humble in heart, and you will find rest for your souls. For My yoke is easy and My burden is light (Matt. 28-30).”

SOAR TOWARDS YOUR DESTINY
The Prophet Isaiah paints a very eloquent verbal picture of those who have yielded to God’s timetable, for healing takes time and those who learn the value of patience, have been given the key that will open up a whole new world and a host of marvelous experiences. Check it out! “YET THOSE WHO WAIT (hope) FOR THE LORD WILL GAIN NEW STRENGTH. THEY WILL MOUNT UP WITH WINGS LIKE EAGLES. They will run and not get tired. They will walk and not become weary. Isa, 40:31

HEY, IF YOUR GONNA FLY – THEN FLY FIRST CLASS!
Now, may the Lord bless you in all you do and thank you for allowing me to share my experience, strength and hope with you all.

Your friend always in the journey.