“You shall not give false testimony against your neighbor.” Deuteronomy 5:20

The cute social media post thing strikes again. I came across this fluff ball the other day: 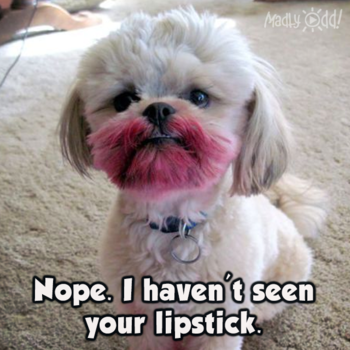 “Nope, I haven’t seen your lipstick.”

Indeed, this deceptive attempt at convincing did not start with our adorable pup. Rather, we need to look at history, a little further back. Let’s peek in on a power couple.

Once upon a time, there was Ananias and Sapphira…Acts 5:1-11

Now a man named Ananias, together with his wife Sapphira, also sold a piece of property.

With his wife’s full knowledge he kept back part of the money for himself, but brought the rest and put it at the apostles’ feet.

Then Peter said, “Ananias, how is it that Satan has so filled your heart that you have lied to the Holy Spirit and have kept for yourself some of the money you received for the land? Didn’t it belong to you before it was sold? And after it was sold, wasn’t the money at your disposal? What made you think of doing such a thing? You have not lied just to human beings but to God.”

When Ananias heard this, he fell down and died…”

…And great fear seized all who heard what had happened.

So, anyway, necessary business still needed to be taken care of. We have to inform his wife about her husband’s passing and clarify matters…

About three hours later his wife came in, not knowing what had happened. Peter asked her, “Tell me, is this the price you and Ananias got for the land?”

Peter said to her, “How could you conspire to test the Spirit of the Lord? Listen! The feet of the men who buried your husband are at the door, and they will carry you out also.”

At that moment she fell down at his feet and died…

Great fear seized the whole church and all who heard about these events.”

Verse 11
And, another shot at learning the lesson?
Eh, maybe…

For, centuries later, we arrive at our lipstick puppy.

“Nope, I haven’t seen your lipstick.”

And we chuckle. We go “awwh.” The ruby red color is smeared all over the white muzzle. No amount of “blending” can make that face look anything shy of “I ate your tube of lipstick.”

But, as much as we may find humor at this pup – or even in our husband and wife duo, we cannot escape an unflattering reality. Often, we lie, fully aware of our lie, with its evidence obviously present.

And often, we do it for the sake of our addictions.

It seems stupid to think we’d ever get away with it, let alone, prosper from it.

He who covers his sins will not prosper: but whoever confesses and forsakes them will have mercy.” Proverbs 28:13

Unless, however, we already believe the lie “we’re getting away with it.” Falling for that time-old doozy has led many down a tricky primrose path.

He whose tongue is deceitful falls into trouble. Proverbs 17:20

Sooner or later, our lies strike us down. We may not be killed on the spot, like Ananias and Sapphira, but let’s not fool ourselves, something is destroyed…

But every man is tempted, when he is drawn away of his own lust, and enticed. Then, after desire has conceived, it gives birth to sin; and sin, when it is full-grown, gives birth to death. James 1:14-15

What would happen if we owned our stuff, ugly warts and all?

Could there, indeed, be a better chance at experiencing mercy, forgiveness or any variation of a second chance?

He who covers his sins will not prosper: but whoever confesses and forsakes them will have mercy.
Proverbs 28:13

What kind of freedom could we tap into by complete honesty?

We don’t have to worry about keeping our lies straight.

We don’t have to live in fear of “being discovered.”

We can be at peace, being who we are, imperfect, acquainted with our own deception experiences and unflattering backstories, yet not “done in” by them.

Concerning the proverbial puppy/cosmetic issue, we could confidently move forward in our lives by embracing truth:

“Yes, I did see your lipstick. Not only that, I stole it, used it AND ate it. I confess and apologize.”

We’d look a lot better being that kind of puppy.