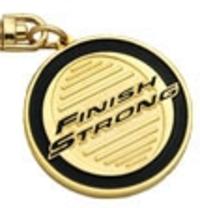 A dear friend and brother gave me a medallion to remind me of “tenacious resolve”. It has the words “finish strong” inscribed on it. I keep it in a place where I will see it often. I don’t know about you, but I need reminders. God is great about giving us sign-posts and reminders. There are always little, and even big reminders along life’s path—they are there to show us that he is still our strongest encourager.

Here is one of my favorite “tenacious resolve” Scriptures:

Therefore, we do not lose heart. So we are not giving up. How could we! Even though on the outside it often looks like things are falling apart on us, on the inside, where God is making new life, not a day goes by without his unfolding grace. These hard times are small potatoes compared to the coming good times, the lavish celebration prepared for us. There’s far more than meets the eye. The things we see now are here today, gone tomorrow. But the things we can’t see will last forever. 2 Corinthians 4:16-18 Msg

We are prone to loosing heart and giving up without this level of regular encouragement. It’s bad enough without negative reporters, naysayers, critics, and discouragers. They seem to abound the harder circumstances become. Which am I-a spiritual cheerleader or “frump grump”? Never heard of a “frump grump”? They only prognosticate on how much worse it’s going to get.

So, what do we do with all the evidence of things seeming to fall apart around us? First, resolve not to ever give up! It’s just not an option. With that “tenacious resolve” you will not lose heart. Once you lose heart-it is easy to become overwhelmed to the point of seeing only the negative and missing all the positive signs around you.

The old system in the law of Moses was only a shadow of the things to come, not the reality of the good things Christ has done for us. The sacrifices under the old system were repeated again and again, year after year, but they were never able to provide perfect cleansing for those who came to worship. 2 If they could have provided perfect cleansing, the sacrifices would have stopped, for the worshipers would have been purified once for all time, and their feelings of guilt would have disappeared.

3 But just the opposite happened. Those yearly sacrifices reminded them of their sins year after year. 4 For it is not possible for the blood of bulls and goats to take away sins. 5 That is why Christ, when he came into the world, said, “You did not want animal sacrifices and grain offerings. But you have given me a body so that I may obey you. 6 No, you were not pleased with animals burned on the altar or with other offerings for sin. 7 Then I said, “Look, I have come to do your will, O God — just as it is written about me in the Scriptures.”

8 Christ said, “You did not want animal sacrifices or grain offerings or animals burned on the altar or other offerings for sin, nor were you pleased with them” (though they are required by the law of Moses). 9 Then he added, “Look, I have come to do your will.” He cancels the first covenant in order to establish the second. 10 And what God wants is for us to be made holy by the sacrifice of the body of Jesus Christ once for all time.

11 Under the old covenant, the priest stands before the altar day after day, offering sacrifices that can never take away sins. 12 But our High Priest offered himself to God as one sacrifice for sins, good for all time. Then he sat down at the place of highest honor at God’s right hand. 13 There he waits until his enemies are humbled as a footstool under his feet. 14 For by that one offering he perfected forever all those whom he is making holy.

15 And the Holy Spirit also testifies that this is so. First he says, 16 “This is the new covenant I will make with my people on that day, says the Lord: I will put my laws in their hearts so they will understand them, and I will write them on their minds so they will obey them.” 17 Then he adds, “I will never again remember their sins and lawless deeds.” 18 Now when sins have been forgiven, there is no need to offer any more sacrifices.

19 And so, dear brothers and sisters, we can boldly enter heaven’s Most Holy Place because of the blood of Jesus. 20 This is the new, life-giving way that Christ has opened up for us through the sacred curtain, by means of his death for us. 21 And since we have a great High Priest who rules over God’s people, 22 let us go right into the presence of God, with true hearts fully trusting him. For our evil consciences have been sprinkled with Christ’s blood to make us clean, and our bodies have been washed with pure water. 23 Without wavering, let us hold tightly to the hope we say we have, for God can be trusted to keep his promise. 24 Think of ways to encourage one another to outbursts of love and good deeds. 25 And let us not neglect our meeting together, as some people do, but encourage and warn each other, especially now that the day of his coming back again is drawing near.

26 Dear friends, if we deliberately continue sinning after we have received a full knowledge of the truth, there is no other sacrifice that will cover these sins. 27 There will be nothing to look forward to but the terrible expectation of God’s judgment and the raging fire that will consume his enemies. 28 Anyone who refused to obey the law of Moses was put to death without mercy on the testimony of two or three witnesses. 29 Think how much more terrible the punishment will be for those who have trampled on the Son of God and have treated the blood of the covenant as if it were common and unholy. Such people have insulted and enraged the Holy Spirit who brings God’s mercy to his people. 30 For we know the one who said, “I will take vengeance. I will repay those who deserve it.” He also said, “The Lord will judge his own people.”

31 It is a terrible thing to fall into the hands of the living God. 32 Don’t ever forget those early days when you first learned about Christ. Remember how you remained faithful even though it meant terrible suffering. 33 Sometimes you were exposed to public ridicule and were beaten, and sometimes you helped others who were suffering the same things. 34 You suffered along with those who were thrown into jail. When all you owned was taken from you, you accepted it with joy. You knew you had better things waiting for you in eternity.

35 Do not throw away this confident trust in the Lord, no matter what happens. Remember the great reward it brings you! 36 Patient endurance is what you need now, so you will continue to do God’s will. Then you will receive all that he has promised. 37 “For in just a little while, the Coming One will come and not delay. 38 And a righteous person will live by faith. But I will have no pleasure in anyone who turns away.” 39 But we are not like those who turn their backs on God and seal their fate. We have faith that assures our salvation. Hebrews 10:1-24, NLT

Next, focus your heart attention on the wonderful work of grace unfolding inside of you. God’s grace always unfolds before us — moving us forward to our expected end of Christ likeness. Equally his grace folds up behind us. That is to dissuade us from trying to go back to some elusive time that seemed better. Today and tomorrow are the most promising times in our life. Even if yesterday was terrific — the future in him is the best!

And then, always keep your spiritual compass on true north — the third heaven. Don’t ever, for one moment, think that the coming blessing of being with “them” for all eternity is not worth every difficulty in the “now”. Everything in this life really is “small potatoes” compared to the eternal celebration that is coming! The lasting value of what he is accomplishing in the present is treasure for us to be discovering forever. We are on an exciting treasure hunt with only the most precious of jewels to be found! And he is the crowning jewel. Be nurtured by “tenacious resolve”.