Jesus said, “You know the way to the place where I am going.”
Thomas said to him, “Lord, we don’t know where you are going, so how can we know the way?”
Jesus answered, “I am the way and the truth and the life. No one comes to the Father except through me. If you really knew me, you would know my Father as well. From now on, you do know him and have seen him.” [John 14:4-7] 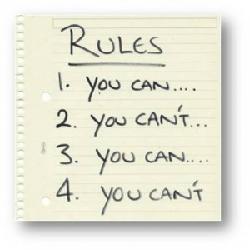 Have you ever been frustrated and said, “Just tell me the rules”?

Last time I gave Satan a little advice. If I wanted to mess up someone’s life, I’d get them to respond to fear. A great indicator of fear is the anger and frustration that demands a list of rules.

The enemy moves toward his goals when we focus on lists of rules. When we try to reduce complex aspects of life like relationships or faith to a set of absolutes, we reduce our own humanity. And that’s what the enemy desperately desires.

Some rules are good. If you’re using computer software, it’s a good idea to learn and follow the rules when you begin. You can break them later when you know what you’re doing.

See, that’s the thing about rules. They’re usually a place to begin. Nothing wrong with that, but we get in trouble when we substitute rules for understanding.

Rules are often intended for novices. Every parent of a three-year-old establishes absolutes like “never step in the street unless you’re holding my hand.” It’s a perfectly logical rule — for a three-year-old — but the kid’s life would be miserable if he turned it into a life-long barrier.

Many rules are meant to evolve or disappear with wisdom and experience. A great way to hinder growth is insisting on absolute compliance to an outdated rule.

Think about you own “rules” and see if any of them were established for particular circumstances that no longer exist. Do any of them need to be modified or eliminated?

Rules are often minimums. Drivers know the basic “rules of the road.” Does anyone believe that knowing and following those rules makes you a good driver? Laws and regulations are a starting point, but they can’t replace experience and judgment.

“Stay out of the street” doesn’t insulate that three-year-old from harm. That doesn’t make it a bad rule, but good parents teach their children to develop awareness and understanding that translate to other situations.

Are you settling for minimum expectations by following any of your personal rules?

Rules encourage a search for loopholes. Nearly any rule can be circumvented. Adhering to the “letter of the law” is rarely the same as doing the right thing, and the enemy wins when following the rules becomes the acceptable standard of behavior.

Children discover incredibly creative ways to endanger themselves. “Stay out of the street” doesn’t cover parking lots or driveways. Strict, ironclad rules can never cover all the possible exceptions.

Can you see places where you justify marginal choices by claiming that “you’re following the rules”?

Rules are often shortcuts. I don’t want to invest the time and energy to understand how it works. Just tell me the rules so I can get on with it.

The problem occurs when we turn relationships and interactions into rules. Anyone who’s married knows that a sure path to disaster is following a list of rules.

Are you using someone’s list of “ten ways to …” as a shortcut, to avoid the hard work of listening and caring and serving?

I’m not a big fan of rules and laws. I don’t advocate breaking them, but I don’t think they get us closer to doing right.

In John 14, Jesus was preparing His friends for His departure. In verse 4 He says, You know the way to the place where I am going.”

Thomas replies that he doesn’t know. He wants a map and some directions.

We can’t know God by following the rules. There’s no system of laws that can get us where we were intended to be. Jesus didn’t give us a map, because it doesn’t work like that.

“I am the way.” Jesus gave us Himself as a compass to point the way. Rules won’t do it. I have to get to know Him.

Where are you using rules to substitute for authentic principles of love and respect? What can you do to move away from this tendency?