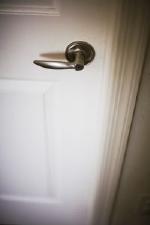 I saw a catchy phrase yesterday that summarized the way I seem to live a good deal of my life: trapped behind an open door.

A story’s told of Houdini once being challenged to escape from a jail cell. After he was placed in the cell and left alone, he removed a thin strip of metal concealed in his belt and began working at the lock. But no matter what he tried, he couldn’t unlock the door.

The great magician had been tricked, because the door was never locked. All he had to do was open it, but his belief that the door was locked was sufficient to confine him.

I think many of my “troubles” are like that. I fuss and worry and struggle, only to discover that a significant portion of the problem lies within my own attitudes. I waste precious energy fighting to flee my self-imposed confinement.

I cannot escape from unacknowledged iron bars constructed of my own fear. As long as I ignore the cell I’ve created, I’ll languish in isolation as authentic as any prison might inflict.

I own a get-out-of-jail-free card, because I alone control my attitude. Perhaps I should simply push the door open.

You can fight to maintain the self-created limitations that imprison you. You can plot and scheme an impossible jailbreak. But you’ll always remain trapped behind an open door, limited by your attitudes and your belief in the lock.

As Houdini discovered, you can’t unlock an unlocked door.

I’m not blind to evil in the world. A great attitude won’t make my wheelchair disappear. Some doors are real, and “the power of positive thinking” doesn’t magically remove the iron bars and imposing locks of disease, pain, and grief. We can’t wish our way past the very real adversity that sometimes confronts us.

But I’d sure like to spend less time trapped behind open doors.