I have a terrible tendency to want, to need to be right. And if my opinions, my way is always right, then I am likely going to be in contention with those around me who see and perceive the world differently than I do. Psalm 94:4 equates arrogance (the need to be right): They pour out their arrogant words; all the evildoers boast. (NRSV) Demanding that only our way is right is the same as boasting. And arrogance isn’t the way of the believer. The believer is called to be humble. In fact, when we are humble, we are 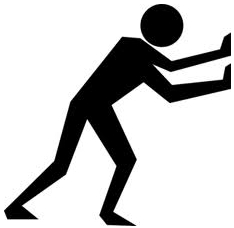 obedient, but when we are not humble — when we are arrogant and self-seeking — we are living in strife with those around us and are in sin. In fact, it is impossible to please God unless we are humble: Before I was humbled I went astray, but now I keep your word. Psalm 119:67 NRSV

The fact is, those of us who love to be right love strife because it’s in strife that we are proven right. We are attracted to debates, to “hot” topics, to the more edgier conversations (sarcasm, etc.). The problem is that such tendencies lead to sin because they place us above others. This isn’t how a Christian is supposed to act: Do nothing from selfish ambition or conceit, but in humility regard others as better than yourselves. Let each of you look not to your own interests, but to the interests of others. Philippians 2:3-4 NRSV

The KJV translates “selfish ambition” as “strife.” Interesting, because this is the same idea that Proverbs is saying. In other words, if the other person becomes angry, hurt, or offended because of something we said or did, then we need to rethink what we did. Do we so love to be right that we invite strife?

There are standards which we can’t cross, but how we uphold them may be as important as the standards themselves. Are we humble, kind, and gentle in our upholding? Or are we arrogant and demanding? Are we more concerned about loving others and being obedient… or are we more concerned about being right? There is a balance and that balance involves our being willing to take any hurt that may result, rather than asking the other person to suffer because of us.

The other point may involve emotional detachment. Most proverbs are written in couplets; that is, they both say the same thing too different ways. Think about building emotional walls, a high threshold. Those of us who refuse (or are reluctant) to be vulnerable at the risk of being hurt may actually invite hurts into our lives. If we are expecting to be hurt, then likely we will be easily offended. If we, instead, trust the Lord to protect us and understand that how others are feeling is more important than how we are feeling may actually suffer less. If we seal ourselves off from others because we don’t want to be hurt anymore, we may actually be inviting hurts to come. The slivers of life may harm us more greatly than huge boulders hurt the one who is trusting God in all things.

The fact is, the Lord wants us to get our eyes off ourselves and onto those around us. There isn’t even one time in our lives where we are allowed to think about our own priorities, our own desires, our own needs. To care for us, that’s the Lord’s responsibility and He’s infinitely good at it! To care for others, that’s our responsibility and it’s something we need to practice with much greater effort.